Hedge Funds Have Never Been This Bullish On Monolithic Power Systems, Inc. (MPWR)

Concerns over rising interest rates and expected further rate increases have hit several stocks hard during the fourth quarter. NASDAQ and Russell 2000 indices were already in correction territory. More importantly, Russell 2000 ETF (IWM) underperformed the larger S&P 500 ETF (SPY) by nearly 7 percentage points in the fourth quarter. Hedge funds and institutional investors tracked by Insider Monkey usually invest a disproportionate amount of their portfolios in smaller cap stocks. We have been receiving indications that hedge funds were paring back their overall exposure and this is one of the factors behind the recent movements in major indices. In this article, we will take a closer look at hedge fund sentiment towards Monolithic Power Systems, Inc. (NASDAQ:MPWR).

To the average investor there are plenty of tools investors employ to size up publicly traded companies. A pair of the best tools are hedge fund and insider trading sentiment. Our researchers have shown that, historically, those who follow the top picks of the best money managers can beat their index-focused peers by a solid margin (see the details here).

Heading into the first quarter of 2019, a total of 25 of the hedge funds tracked by Insider Monkey held long positions in this stock, a change of 39% from one quarter earlier. Below, you can check out the change in hedge fund sentiment towards MPWR over the last 14 quarters. So, let’s see which hedge funds were among the top holders of the stock and which hedge funds were making big moves. 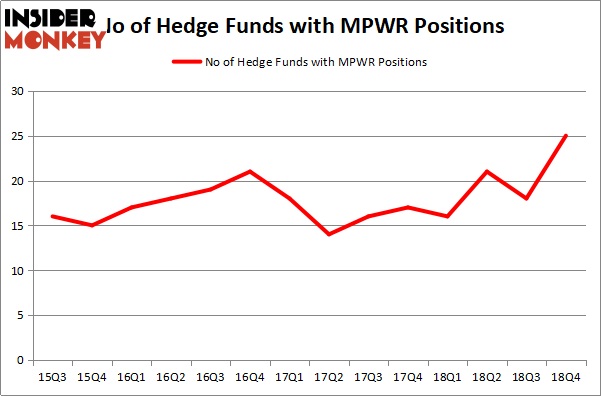 Of the funds tracked by Insider Monkey, Alex Sacerdote’s Whale Rock Capital Management has the largest position in Monolithic Power Systems, Inc. (NASDAQ:MPWR), worth close to $46.5 million, corresponding to 1.5% of its total 13F portfolio. The second most bullish fund manager is Brian Ashford-Russell and Tim Woolley of Polar Capital, with a $26.9 million position; the fund has 0.3% of its 13F portfolio invested in the stock. Other members of the smart money that are bullish contain John Hurley’s Cavalry Asset Management, John Osterweis’s Osterweis Capital Management and Phill Gross and Robert Atchinson’s Adage Capital Management.

As one would reasonably expect, specific money managers were breaking ground themselves. Cavalry Asset Management, managed by John Hurley, assembled the largest position in Monolithic Power Systems, Inc. (NASDAQ:MPWR). Cavalry Asset Management had $21.8 million invested in the company at the end of the quarter. John Osterweis’s Osterweis Capital Management also made a $20.5 million investment in the stock during the quarter. The other funds with new positions in the stock are Phill Gross and Robert Atchinson’s Adage Capital Management, Neal Nathani and Darren Dinneen’s Totem Point Management, and Jim Simons’s Renaissance Technologies.

As you can see these stocks had an average of 20 hedge funds with bullish positions and the average amount invested in these stocks was $341 million. That figure was $171 million in MPWR’s case. JetBlue Airways Corporation (NASDAQ:JBLU) is the most popular stock in this table. On the other hand CAE, Inc. (NYSE:CAE) is the least popular one with only 9 bullish hedge fund positions. Monolithic Power Systems, Inc. (NASDAQ:MPWR) is not the most popular stock in this group but hedge fund interest is still above average. Our calculations showed that top 15 most popular stocks) among hedge funds returned 24.2% through April 22nd and outperformed the S&P 500 ETF (SPY) by more than 7 percentage points. Hedge funds were also right about betting on MPWR as the stock returned 32.3% and outperformed the market by an even larger margin. Hedge funds were rewarded for their relative bullishness.