At Q4’s end, a total of 32 of the hedge funds tracked by Insider Monkey held long positions in this stock, a change of 23% from the previous quarter. On the other hand, there were a total of 26 hedge funds with a bullish position in FIVE a year ago. With hedge funds’ positions undergoing their usual ebb and flow, there exists a few notable hedge fund managers who were boosting their stakes meaningfully (or already accumulated large positions). 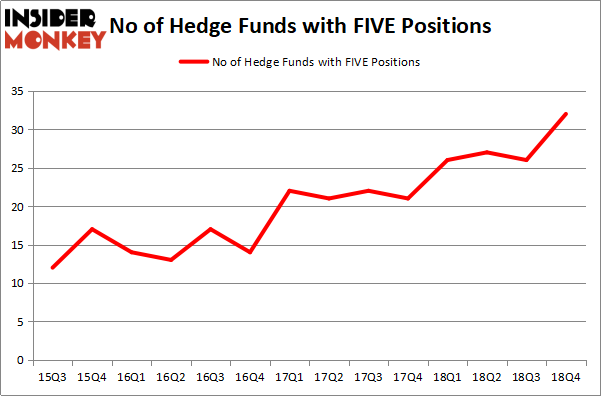 Of the funds tracked by Insider Monkey, Ken Griffin’s Citadel Investment Group has the biggest position in Five Below Inc (NASDAQ:FIVE), worth close to $74.4 million, corresponding to less than 0.1%% of its total 13F portfolio. Coming in second is Jim Simons of Renaissance Technologies, with a $67.5 million position; the fund has 0.1% of its 13F portfolio invested in the stock. Remaining peers that are bullish consist of Principal Global Investors’s Columbus Circle Investors, John Overdeck and David Siegel’s Two Sigma Advisors and Cliff Asness’s AQR Capital Management.

As one would reasonably expect, some big names have been driving this bullishness. Marshall Wace LLP, managed by Paul Marshall and Ian Wace, initiated the biggest position in Five Below Inc (NASDAQ:FIVE). Marshall Wace LLP had $16.9 million invested in the company at the end of the quarter. Louis Bacon’s Moore Global Investments also initiated a $16.4 million position during the quarter. The other funds with new positions in the stock are Andrew Feldstein and Stephen Siderow’s Blue Mountain Capital, Steven Boyd’s Armistice Capital, and Anthony Joseph Vaccarino’s North Fourth Asset Management.

As you can see these stocks had an average of 28 hedge funds with bullish positions and the average amount invested in these stocks was $670 million. That figure was $388 million in FIVE’s case. Michael Kors Holdings Ltd (NYSE:KORS) is the most popular stock in this table. On the other hand Nektar Therapeutics (NASDAQ:NKTR) is the least popular one with only 20 bullish hedge fund positions. Five Below Inc (NASDAQ:FIVE) is not the most popular stock in this group but hedge fund interest is still above average. Our calculations showed that top 15 most popular stocks among hedge funds returned 21.3% through April 8th and outperformed the S&P 500 ETF (SPY) by more than 5 percentage points. Hedge funds were also right about betting on FIVE as the stock returned 22.6% and outperformed the market as well.