Hedge Funds Have Never Been This Bullish On Okta, Inc. (OKTA), See What Happened Next

Is Okta, Inc. (NASDAQ:OKTA) a good stock to buy? Money managers are buying. The number of long hedge fund positions jumped by 8 during the fourth quarter of 2018. There were 32 hedge funds in our database with OKTA positions at the end of September. Overall hedge fund sentiment towards OKTA is at its all time high. This is usually a bullish sign. For example hedge fund sentiment in Xilinx Inc. (XLNX) was also at its all time high at the beginning of this year and the stock returned more than 46% in 2.5 months. We observed similar performances from Twilio, MSCI and Progressive Corporation (PGR); these stocks returned 37%, 29% and 27% respectively. Hedge fund sentiment towards IQVIA Holdings Inc. (IQV), Brookfield Asset Management Inc. (BAM), Atlassian Corporation Plc (TEAM), RCL, MTB, VAR and CRH hit all time highs at the end of December, and all of these stocks returned more than 20% in the first 2.5 months of this year.

How have hedgies been trading Okta, Inc. (NASDAQ:OKTA)? 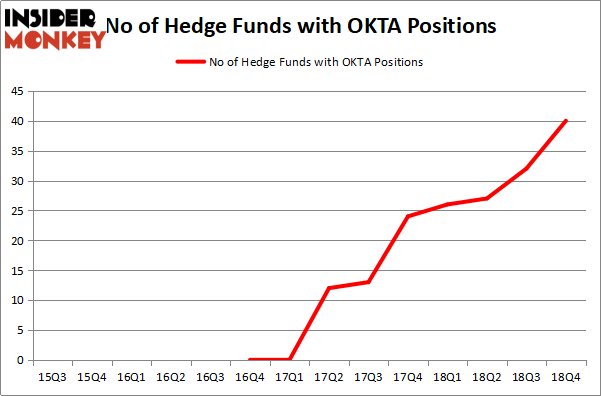 The largest stake in Okta, Inc. (NASDAQ:OKTA) was held by Alkeon Capital Management, which reported holding $124.4 million worth of stock at the end of September. It was followed by Whale Rock Capital Management with a $119.5 million position. Other investors bullish on the company included Renaissance Technologies, Two Sigma Advisors, and D E Shaw.

As one would reasonably expect, some big names have jumped into Okta, Inc. (NASDAQ:OKTA) headfirst. Light Street Capital, managed by Glen Kacher, assembled the most outsized position in Okta, Inc. (NASDAQ:OKTA). Light Street Capital had $40.8 million invested in the company at the end of the quarter. Stanley Druckenmiller’s Duquesne Capital also initiated a $11.1 million position during the quarter. The other funds with new positions in the stock are Nehal Chopra’s Ratan Capital Group, James Crichton’s Hitchwood Capital Management, and Philip Hempleman’s Ardsley Partners.

As you can see these stocks had an average of 20.75 hedge funds with bullish positions and the average amount invested in these stocks was $429 million. That figure was $673 million in OKTA’s case. PVH Corp (NYSE:PVH) is the most popular stock in this table. On the other hand Western Gas Partners, LP (NYSE:WES) is the least popular one with only 6 bullish hedge fund positions. Compared to these stocks Okta, Inc. (NASDAQ:OKTA) is more popular among hedge funds. Hedge funds have never been bullish on OKTA and they were rewarded for their confidence in the stock. OKTA shares returned 37.4% and performed even better than the  top 15 most popular stocks among hedge funds which returned 21.3% through April 8th and outperformed the S&P 500 ETF (SPY) by more than 5 percentage points. OKTA shareholders beat the market by more than 20 percentage points. You can see the entire list of these shrewd hedge funds who are betting on OKTA here. Their other stock picks might be worth checking out.