Hedge Funds Have Never Been This Bullish On Mellanox Technologies, Ltd. (MLNX)

Is Mellanox Technologies, Ltd. (NASDAQ:MLNX) a good bet right now? We like to analyze hedge fund sentiment before doing days of in-depth research. We do so because hedge funds and other elite investors have numerous Ivy League graduates, expert network advisers, and supply chain tipsters working or consulting for them. There is not a shortage of news stories covering failed hedge fund investments and it is a fact that hedge funds’ picks don’t beat the market 100% of the time, but their consensus picks have historically done very well and have outperformed the market after adjusting for risk.

To most traders, hedge funds are seen as slow, outdated investment vehicles of the past. While there are more than 8000 funds trading at the moment, Our experts choose to focus on the aristocrats of this group, approximately 750 funds. These money managers have their hands on most of the smart money’s total asset base, and by keeping an eye on their finest picks, Insider Monkey has come up with various investment strategies that have historically outperformed the market. Insider Monkey’s flagship hedge fund strategy exceeded the S&P 500 index by nearly 5 percentage points a year since its inception in May 2014 through early November 2018. We were able to generate large returns even by identifying short candidates. Our portfolio of short stocks lost 27.5% since February 2017 (through March 12th) even though the market was up nearly 25% during the same period. We just shared a list of 6 short targets in our latest quarterly update and they are already down an average of 6% in less than a month.

How have hedgies been trading Mellanox Technologies, Ltd. (NASDAQ:MLNX)?

At the end of the fourth quarter, a total of 45 of the hedge funds tracked by Insider Monkey held long positions in this stock, a change of 41% from the previous quarter. The graph below displays the number of hedge funds with bullish position in MLNX over the last 14 quarters. So, let’s find out which hedge funds were among the top holders of the stock and which hedge funds were making big moves. 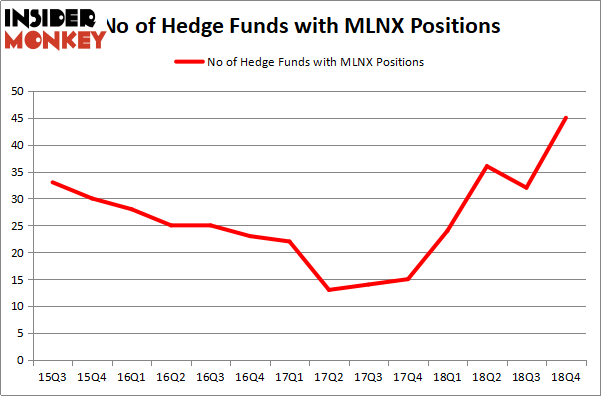 More specifically, Starboard Value LP was the largest shareholder of Mellanox Technologies, Ltd. (NASDAQ:MLNX), with a stake worth $399.2 million reported as of the end of September. Trailing Starboard Value LP was Citadel Investment Group, which amassed a stake valued at $171 million. Rima Senvest Management, Sachem Head Capital, and Renaissance Technologies were also very fond of the stock, giving the stock large weights in their portfolios.

Consequently, some big names were leading the bulls’ herd. Sachem Head Capital, managed by Scott Ferguson, established the most valuable position in Mellanox Technologies, Ltd. (NASDAQ:MLNX). Sachem Head Capital had $91 million invested in the company at the end of the quarter. Snehal Amin’s Windacre Partnership also made a $66.9 million investment in the stock during the quarter. The other funds with new positions in the stock are Frank Brosens’s Taconic Capital, Clint Carlson’s Carlson Capital, and Anand Parekh’s Alyeska Investment Group.

Let’s go over hedge fund activity in other stocks – not necessarily in the same industry as Mellanox Technologies, Ltd. (NASDAQ:MLNX) but similarly valued. We will take a look at The Hanover Insurance Group, Inc. (NYSE:THG), Hexcel Corporation (NYSE:HXL), HubSpot Inc (NYSE:HUBS), and Monolithic Power Systems, Inc. (NASDAQ:MPWR). All of these stocks’ market caps are closest to MLNX’s market cap.

As you can see these stocks had an average of 22.5 hedge funds with bullish positions and the average amount invested in these stocks was $260 million. That figure was $1295 million in MLNX’s case. Monolithic Power Systems, Inc. (NASDAQ:MPWR) is the most popular stock in this table. On the other hand The Hanover Insurance Group, Inc. (NYSE:THG) is the least popular one with only 20 bullish hedge fund positions. Compared to these stocks Mellanox Technologies, Ltd. (NASDAQ:MLNX) is more popular among hedge funds. Our calculations showed that top 15 most popular stocks) among hedge funds returned 24.2% through April 22nd and outperformed the S&P 500 ETF (SPY) by more than 7 percentage points. Hedge funds were also right about betting on MLNX as the stock returned 29.9% and outperformed the market by an even larger margin. Hedge funds were clearly right about piling into this stock relative to other stocks with similar market capitalizations.