Hedge Funds Have Never Been This Bullish On Xerox Corporation (XRX), See What Happened Next

Out of thousands of stocks that are currently traded on the market, it is difficult to identify those that will really generate strong returns. Hedge funds and institutional investors spend millions of dollars on analysts with MBAs and PhDs, who are industry experts and well connected to other industry and media insiders on top of that. Individual investors can piggyback the hedge funds employing these talents and can benefit from their vast resources and knowledge in that way. We analyze quarterly 13F filings of nearly 750 hedge funds and, by looking at the smart money sentiment that surrounds a stock, we can determine whether it has the potential to beat the market over the long-term. Therefore, let’s take a closer look at what smart money thinks about Xerox Corporation (NYSE:XRX).

How have hedgies been trading Xerox Corporation (NYSE:XRX)?

Heading into the first quarter of 2019, a total of 44 of the hedge funds tracked by Insider Monkey were bullish on this stock, a change of 19% from one quarter earlier. Below, you can check out the change in hedge fund sentiment towards XRX over the last 14 quarters. So, let’s examine which hedge funds were among the top holders of the stock and which hedge funds were making big moves. 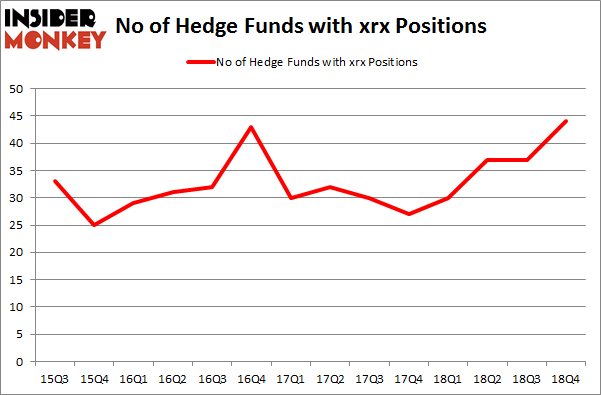 Among these funds, Icahn Capital LP held the most valuable stake in Xerox Corporation (NYSE:XRX), which was worth $463.5 million at the end of the third quarter. On the second spot was Citadel Investment Group which amassed $109.8 million worth of shares. Moreover, Kavi Asset Management, Mason Capital Management, and York Capital Management were also bullish on Xerox Corporation (NYSE:XRX), allocating a large percentage of their portfolios to this stock.

As one would reasonably expect, key money managers have jumped into Xerox Corporation (NYSE:XRX) headfirst. Falcon Edge Capital, managed by Richard Gerson and Navroz D. Udwadia, initiated the most outsized position in Xerox Corporation (NYSE:XRX). Falcon Edge Capital had $17.8 million invested in the company at the end of the quarter. Charles Lemonides’s Valueworks LLC also made a $9.5 million investment in the stock during the quarter. The other funds with brand new XRX positions are Peter Rathjens, Bruce Clarke and John Campbell’s Arrowstreet Capital, Dmitry Balyasny’s Balyasny Asset Management, and Andrew Feldstein and Stephen Siderow’s Blue Mountain Capital.

As you can see these stocks had an average of 19.25 hedge funds with bullish positions and the average amount invested in these stocks was $292 million. That figure was $889 million in XRX’s case. Six Flags Entertainment Corp (NYSE:SIX) is the most popular stock in this table. On the other hand NewMarket Corporation (NYSE:NEU) is the least popular one with only 16 bullish hedge fund positions. Compared to these stocks Xerox Corporation (NYSE:XRX) is more popular among hedge funds. Hedge funds moved into Xerox at the right time as the stock returned 72.2% in 2019 through April 8th and outperformed the market by 56 percentage points. Sometimes it pays big to follow the footsteps of hedge funds.