Hedge Funds Have Never Been This Bullish On EnCana Corporation (ECA)

The elite funds run by legendary investors such as David Tepper and Dan Loeb make hundreds of millions of dollars for themselves and their investors by spending enormous resources doing research on small cap stocks that big investment banks don’t follow. Because of their pay structures, they have strong incentives to do the research necessary to beat the market. That’s why we pay close attention to what they think in small cap stocks. In this article, we take a closer look at EnCana Corporation (NYSE:ECA) from the perspective of those elite funds.

EnCana Corporation (NYSE:ECA) has seen an increase in hedge fund interest in recent months. Overall hedge fund sentiment towards EnCana has never been this bullish. This is usually a bullish sign. For example hedge fund sentiment in Xilinx Inc. (XLNX) was also at its all time high at the beginning of this year and the stock returned more than 46% in 2.5 months. We observed similar performances from OKTA, Twilio, CCK, MSCI, MASI and Progressive Corporation (PGR); these stocks returned 37%, 37%, 35%, 29%, 28% and 27% respectively. Hedge fund sentiment towards IQVIA Holdings Inc. (IQV), Brookfield Asset Management (BAM), Atlassian Corporation (TEAM), RCL, MTB, VAR, RNG, FIVE and CRH hit all time highs at the end of December, and all of these stocks returned more than 20% in the first 2.5-3 months of this year.

Heading into the first quarter of 2019, a total of 40 of the hedge funds tracked by Insider Monkey held long positions in this stock, a change of 25% from the previous quarter. The graph below displays the number of hedge funds with bullish position in ECA over the last 14 quarters. So, let’s check out which hedge funds were among the top holders of the stock and which hedge funds were making big moves. 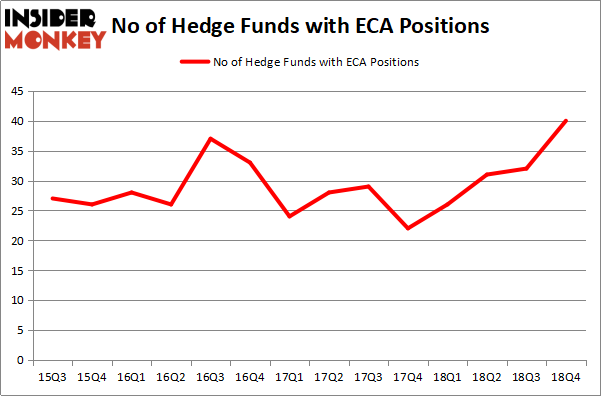 More specifically, Point72 Asset Management was the largest shareholder of EnCana Corporation (NYSE:ECA), with a stake worth $247.8 million reported as of the end of September. Trailing Point72 Asset Management was Citadel Investment Group, which amassed a stake valued at $119.1 million. Viking Global, Renaissance Technologies, and Whitebox Advisors were also very fond of the stock, giving the stock large weights in their portfolios.

As aggregate interest increased, some big names were breaking ground themselves. Whitebox Advisors, managed by Andy Redleaf, initiated the most outsized position in EnCana Corporation (NYSE:ECA). Whitebox Advisors had $50.8 million invested in the company at the end of the quarter. Matthew Mark’s Jet Capital Investors also initiated a $43.1 million position during the quarter. The other funds with brand new ECA positions are Vince Maddi and Shawn Brennan’s SIR Capital Management, Paul Singer’s Elliott Management, and Carl Tiedemann and Michael Tiedemann’s TIG Advisors.

As you can see these stocks had an average of 26.75 hedge funds with bullish positions and the average amount invested in these stocks was $524 million. That figure was $851 million in ECA’s case. Signature Bank (NASDAQ:SBNY) is the most popular stock in this table. On the other hand Bio-Techne Corporation (NASDAQ:TECH) is the least popular one with only 17 bullish hedge fund positions. Compared to these stocks EnCana Corporation (NYSE:ECA) is more popular among hedge funds. Our calculations showed that top 15 most popular stocks among hedge funds returned 21.3% through April 8th and outperformed the S&P 500 ETF (SPY) by more than 5 percentage points. Hedge funds were also right about betting on EnCana as the stock returned 26.1% and outperformed the market as well.