Hedge Funds Have Never Been More Bullish On The Trade Desk, Inc. (TTD)

Is The Trade Desk, Inc. (NASDAQ:TTD) a good stock to buy right now? We at Insider Monkey like to examine what billionaires and hedge funds think of a company before doing days of research on it. Given their 2 and 20 payment structure, hedge funds have more incentives and resources than the average investor. The funds have access to expert networks and get tips from industry insiders. They also have numerous Ivy League graduates and MBAs. Like everyone else, hedge funds perform miserably at times, but their consensus picks have historically outperformed the market after risk adjustments.

In today’s marketplace there are several methods market participants can use to grade stocks. A pair of the best methods are hedge fund and insider trading indicators. Our researchers have shown that, historically, those who follow the best picks of the best money managers can outperform the S&P 500 by a solid margin (see the details here).

We’re going to take a look at the new hedge fund action regarding The Trade Desk, Inc. (NASDAQ:TTD).

How are hedge funds trading The Trade Desk, Inc. (NASDAQ:TTD)? 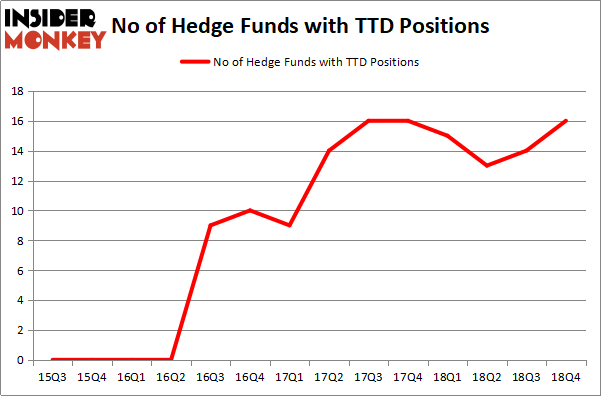 The largest stake in The Trade Desk, Inc. (NASDAQ:TTD) was held by Renaissance Technologies, which reported holding $42.2 million worth of stock at the end of September. It was followed by Citadel Investment Group with a $26.6 million position. Other investors bullish on the company included PEAK6 Capital Management, D E Shaw, and Ogborne Capital.

With a general bullishness amongst the heavyweights, key hedge funds were breaking ground themselves. Citadel Investment Group, managed by Ken Griffin, created the biggest position in The Trade Desk, Inc. (NASDAQ:TTD). Citadel Investment Group had $25.1 million invested in the company at the end of the quarter. Mike Ogborne’s Ogborne Capital also initiated a $7.5 million position during the quarter. The other funds with new positions in the stock are Peter Rathjens, Bruce Clarke and John Campbell’s Arrowstreet Capital, Israel Englander’s Millennium Management, and Doug Gordon, Jon Hilsabeck and Don Jabro’s Shellback Capital.

As you can see these stocks had an average of 27.5 hedge funds with bullish positions and the average amount invested in these stocks was $420 million. That figure was $121 million in TTD’s case. First American Financial Corp (NYSE:FAF) is the most popular stock in this table. On the other hand Reliance Steel & Aluminum Co. (NYSE:RS) is the least popular one with only 20 bullish hedge fund positions. Compared to these stocks The Trade Desk, Inc. (NASDAQ:TTD) is even less popular than RS though hedge fund sentiment towards the stock is at its all time high. Our calculations showed that top 15 most popular stocks) among hedge funds returned 24.2% through April 22nd and outperformed the S&P 500 ETF (SPY) by more than 7 percentage points. Sixteen hedge funds were also right about betting on TTD as the stock returned 81.8% and outperformed the market by an even larger margin.