Hedge Funds Have Never Been This Bullish On Euronet Worldwide, Inc. (EEFT)

Is Euronet Worldwide, Inc. (NASDAQ:EEFT) an attractive investment right now? Money managers are in an optimistic mood. The number of long hedge fund positions moved up by 7 recently.EEFT was in 31 hedge funds’ portfolios at the end of the fourth quarter of 2018. Overall hedge fund sentiment towards the stock is at its all time high. This is usually a bullish sign. For example hedge fund sentiment in Xilinx Inc. (XLNX) was also at its all time high at the beginning of this year and the stock returned more than 46% in 2.5 months. We observed similar performances from OKTA, Twilio, CCK, MSCI, MASI and Progressive Corporation (PGR); these stocks returned 37%, 37%, 35%, 29%, 28% and 27% respectively. Hedge fund sentiment towards IQVIA Holdings Inc. (IQV), Brookfield Asset Management (BAM), Atlassian Corporation (TEAM), RCL, MTB, VAR, RNG, FIVE, ECA, SBNY, KL and CRH hit all time highs at the end of December, and all of these stocks returned more than 20% in the first 2.5-3 months of this year. 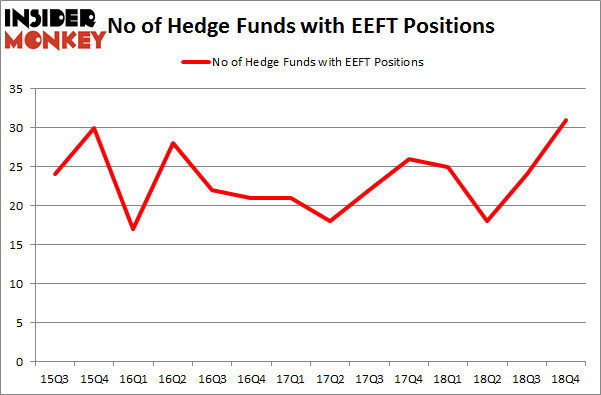 Among these funds, Renaissance Technologies held the most valuable stake in Euronet Worldwide, Inc. (NASDAQ:EEFT), which was worth $28 million at the end of the third quarter. On the second spot was Greenhouse Funds which amassed $25.4 million worth of shares. Moreover, Balyasny Asset Management, Crosslink Capital, and Portolan Capital Management were also bullish on Euronet Worldwide, Inc. (NASDAQ:EEFT), allocating a large percentage of their portfolios to this stock.

As one would reasonably expect, specific money managers were leading the bulls’ herd. Garelick Capital Partners, managed by Bruce Garelick, initiated the biggest position in Euronet Worldwide, Inc. (NASDAQ:EEFT). Garelick Capital Partners had $11.9 million invested in the company at the end of the quarter. Principal Global Investors’s Columbus Circle Investors also initiated a $9.9 million position during the quarter. The other funds with new positions in the stock are Bruce Emery’s Greenvale Capital, Joel Greenblatt’s Gotham Asset Management, and Matthew Hulsizer’s PEAK6 Capital Management.

As you can see these stocks had an average of 18 hedge funds with bullish positions and the average amount invested in these stocks was $412 million. That figure was $215 million in EEFT’s case. Perrigo Company (NYSE:PRGO) is the most popular stock in this table. On the other hand YPF Sociedad Anonima (NYSE:YPF) is the least popular one with only 15 bullish hedge fund positions. Compared to these stocks Euronet Worldwide, Inc. (NASDAQ:EEFT) is more popular among hedge funds. Our calculations showed that top 15 most popular stocks among hedge funds returned 21.3% through April 8th and outperformed the S&P 500 ETF (SPY) by more than 5 percentage points. Hedge funds were also right about betting on EEFT as the stock returned 40.2% and outperformed the market as well.