We at Insider Monkey have gone over 700 13F filings that hedge funds and prominent investors are required to file by the SEC. The 13F filings show the funds’ and investors’ portfolio positions as of December 31st. In this article we look at what those investors think of IQVIA Holdings, Inc. (NYSE:IQV).

Is IQVIA Holdings, Inc. (NYSE:IQV) a buy here? The smart money is becoming more confident. The number of long hedge fund bets advanced by 1 lately. Even though our calculations also showed that IQV isn’t among the 30 most popular stocks among hedge funds, overall hedge fund sentiment towards IQV currently sits at its all time high. 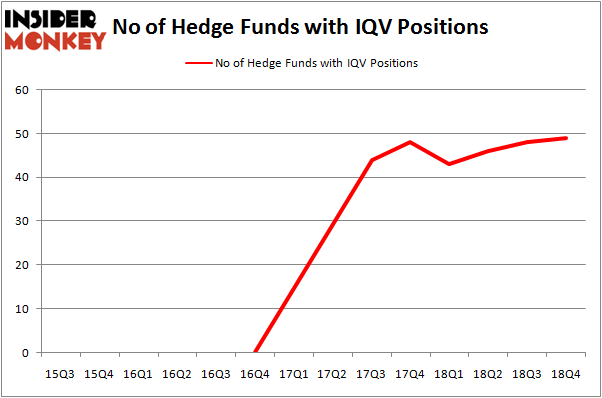 When looking at the institutional investors followed by Insider Monkey, Stephen Mandel’s Lone Pine Capital has the number one position in IQVIA Holdings, Inc. (NYSE:IQV), worth close to $895.5 million, amounting to 6.1% of its total 13F portfolio. On Lone Pine Capital’s heels is Larry Robbins of Glenview Capital, with a $623 million position; 6% of its 13F portfolio is allocated to the stock. Remaining peers with similar optimism consist of Farallon Capital, Cliff Asness’s AQR Capital Management and Robert Pitts’s Steadfast Capital Management.

As one would reasonably expect, key hedge funds were breaking ground themselves. Point72 Asset Management, managed by Steve Cohen, created the biggest position in IQVIA Holdings, Inc. (NYSE:IQV). Point72 Asset Management had $137.1 million invested in the company at the end of the quarter. Aaron Cowen’s Suvretta Capital Management also made a $122.9 million investment in the stock during the quarter. The following funds were also among the new IQV investors: Gabriel Plotkin’s Melvin Capital Management, Paul Marshall and Ian Wace’s Marshall Wace LLP, and John Overdeck and David Siegel’s Two Sigma Advisors.

As you can see these stocks had an average of 32.5 hedge funds with bullish positions and the average amount invested in these stocks was $2017 million. That figure was $4513 million in IQV’s case. United Continental Holdings Inc (NASDAQ:UAL) is the most popular stock in this table. On the other hand Hormel Foods Corporation (NYSE:HRL) is the least popular one with only 18 bullish hedge fund positions. IQVIA Holdings, Inc. (NYSE:IQV) is the most popular stock in this group together with UAL. Our calculations showed that top 15 most popular stocks among hedge funds returned 19.7% through March 15th and outperformed the S&P 500 ETF (SPY) by 6.6 percentage points. Hedge funds were also right about betting on IQV as the stock returned 21.8% and outperformed the market as well.