Is Varian Medical Systems, Inc. (NYSE:VAR) a good bet right now? We like to analyze hedge fund sentiment before doing days of in-depth research. We do so because hedge funds and other elite investors have numerous Ivy League graduates, expert network advisers, and supply chain tipsters working or consulting for them. There is not a shortage of news stories covering failed hedge fund investments and it is a fact that hedge funds’ picks don’t beat the market 100% of the time, but their consensus picks have historically done very well and have outperformed the market after adjusting for risk.

Varian Medical Systems, Inc. (NYSE:VAR) was in 30 hedge funds’ portfolios at the end of December. VAR has experienced an increase in enthusiasm from smart money lately. There were 19 hedge funds in our database with VAR positions at the end of September. Overall hedge fund sentiment towards VAR is at its all time high. This is usually a bullish indicator. For example hedge fund sentiment in Xilinx Inc. (XLNX) was also at its all time high at the beginning of this year and the stock returned more than 46% in 2.5 months. We observed a similar performance from Progressive Corporation (PGR) which returned 27% and MSCI which returned 29%. Both stocks outperformed the S&P 500 Index by 14 and 16 percentage points respectively. Hedge fund sentiment towards IQVIA Holdings Inc. (IQV), Brookfield Asset Management Inc. (BAM), Atlassian Corporation Plc (TEAM), RCL, MTB and CRH hit all time highs at the end of December, and all of these stocks returned more than 20% in the first 2.5 months of this year. 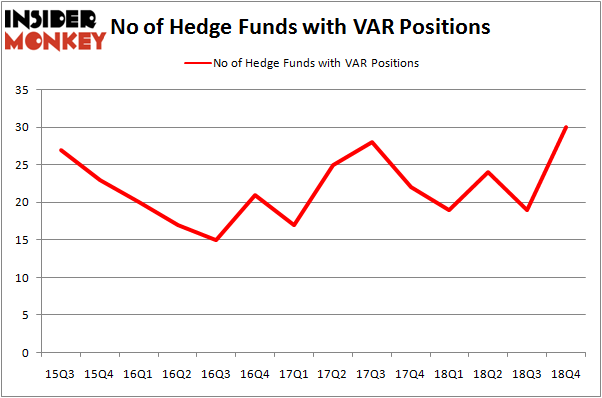 The largest stake in Varian Medical Systems, Inc. (NYSE:VAR) was held by Renaissance Technologies, which reported holding $136 million worth of stock at the end of September. It was followed by Millennium Management with a $132.1 million position. Other investors bullish on the company included AQR Capital Management, Arrowstreet Capital, and Two Sigma Advisors.

As you can see these stocks had an average of 29.75 hedge funds with bullish positions and the average amount invested in these stocks was $927 million. That figure was $804 million in VAR’s case. Live Nation Entertainment, Inc. (NYSE:LYV) is the most popular stock in this table. On the other hand Hasbro, Inc. (NASDAQ:HAS) is the least popular one with only 19 bullish hedge fund positions. Varian Medical Systems, Inc. (NYSE:VAR) is not the most popular stock in this group but hedge fund interest is still above average. Our calculations showed that top 15 most popular stocks among hedge funds returned 19.7% through March 15th and outperformed the S&P 500 ETF (SPY) by 6.6 percentage points. Hedge funds were also right about betting on VAR as the stock returned 20.6% and outperformed the market as well.