We’re going to take a glance at the key hedge fund action regarding Methanex Corporation (NASDAQ:MEOH).

How have hedgies been trading Methanex Corporation (NASDAQ:MEOH)? 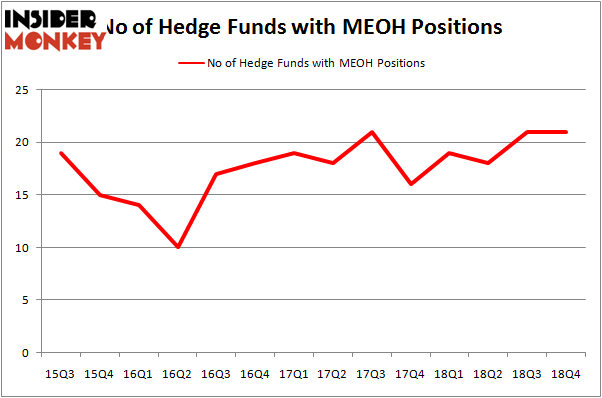 More specifically, AQR Capital Management was the largest shareholder of Methanex Corporation (NASDAQ:MEOH), with a stake worth $128 million reported as of the end of September. Trailing AQR Capital Management was Renaissance Technologies, which amassed a stake valued at $32.9 million. Millennium Management, Arrowstreet Capital, and Two Sigma Advisors were also very fond of the stock, giving the stock large weights in their portfolios.

Seeing as Methanex Corporation (NASDAQ:MEOH) has faced declining sentiment from hedge fund managers, it’s safe to say that there lies a certain “tier” of funds that elected to cut their full holdings by the end of the third quarter. Intriguingly, James H. Litinsky’s JHL Capital Group dumped the biggest stake of the “upper crust” of funds tracked by Insider Monkey, valued at close to $14.2 million in stock. Steve Cohen’s fund, Point72 Asset Management, also dumped its stock, about $2 million worth. These transactions are intriguing to say the least, as total hedge fund interest stayed the same (this is a bearish signal in our experience).

As you can see these stocks had an average of 28.5 hedge funds with bullish positions and the average amount invested in these stocks was $467 million. That figure was $264 million in MEOH’s case. Coupa Software Incorporated (NASDAQ:COUP) is the most popular stock in this table. On the other hand Carter’s, Inc. (NYSE:CRI) is the least popular one with only 22 bullish hedge fund positions. Compared to these stocks Methanex Corporation (NASDAQ:MEOH) is even less popular than CRI though the overall hedge fund sentiment towards the stock is at its all time high. Our calculations showed that top 15 most popular stocks) among hedge funds returned 24.2% through April 22nd and outperformed the S&P 500 ETF (SPY) by more than 7 percentage points. Hedge funds were also right about betting on MEOH, though not to the same extent, as the stock returned 23.3% and outperformed the market as well.