Is AECOM (ACM) A Good Stock To Buy?

We at Insider Monkey have gone over 730 13F filings that hedge funds and prominent investors are required to file by the SEC The 13F filings show the funds’ and investors’ portfolio positions as of June 28th. In this article, we look at what those funds think of AECOM (NYSE:ACM) based on that data.

AECOM (NYSE:ACM) has experienced an increase in hedge fund sentiment in recent months. Our calculations also showed that ACM isn’t among the 30 most popular stocks among hedge funds (view the video below).

To most market participants, hedge funds are perceived as underperforming, outdated financial tools of the past. While there are greater than 8000 funds with their doors open at present, Our experts hone in on the leaders of this club, about 750 funds. These hedge fund managers manage most of the smart money’s total capital, and by tailing their inimitable investments, Insider Monkey has deciphered numerous investment strategies that have historically outstripped the broader indices. Insider Monkey’s flagship hedge fund strategy outpaced the S&P 500 index by around 5 percentage points per annum since its inception in May 2014. We were able to generate large returns even by identifying short candidates. Our portfolio of short stocks lost 25.7% since February 2017 (through September 30th) even though the market was up more than 33% during the same period. We just shared a list of 10 short targets in our latest quarterly update . 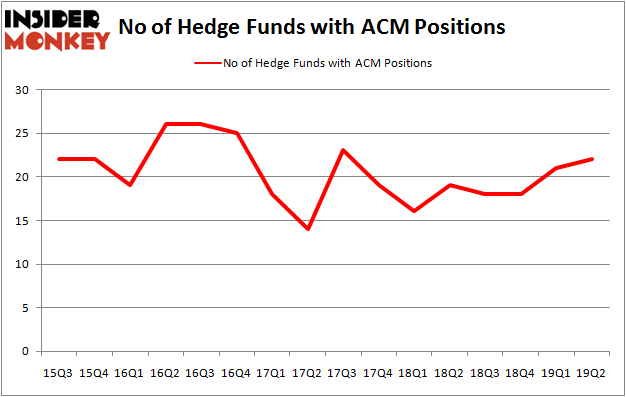 Unlike some fund managers who are betting on Dow reaching 40000 in a year, our long-short investment strategy doesn’t rely on bull markets to deliver double digit returns. We only rely on hedge fund buy/sell signals. We’re going to take a look at the recent hedge fund action encompassing AECOM (NYSE:ACM).

More specifically, Luminus Management was the largest shareholder of AECOM (NYSE:ACM), with a stake worth $177.4 million reported as of the end of March. Trailing Luminus Management was Starboard Value LP, which amassed a stake valued at $166.6 million. Pzena Investment Management, Renaissance Technologies, and Engine Capital were also very fond of the stock, giving the stock large weights in their portfolios.

As one would reasonably expect, some big names have jumped into AECOM (NYSE:ACM) headfirst. Starboard Value LP, managed by Jeffrey Smith, created the most valuable position in AECOM (NYSE:ACM). Starboard Value LP had $166.6 million invested in the company at the end of the quarter. Alexander Mitchell’s Scopus Asset Management also made a $16.5 million investment in the stock during the quarter. The following funds were also among the new ACM investors: Sara Nainzadeh’s Centenus Global Management, Peter Algert and Kevin Coldiron’s Algert Coldiron Investors, and Cliff Asness’s AQR Capital Management.

As you can see these stocks had an average of 18.25 hedge funds with bullish positions and the average amount invested in these stocks was $162 million. That figure was $599 million in ACM’s case. Monolithic Power Systems, Inc. (NASDAQ:MPWR) is the most popular stock in this table. On the other hand Antero Midstream Corp (NYSE:AM) is the least popular one with only 15 bullish hedge fund positions. AECOM (NYSE:ACM) is not the most popular stock in this group but hedge fund interest is still above average. This is a slightly positive signal but we’d rather spend our time researching stocks that hedge funds are piling on. Our calculations showed that top 20 most popular stocks among hedge funds returned 24.4% in 2019 through September 30th and outperformed the S&P 500 ETF (SPY) by 4 percentage points. Unfortunately ACM wasn’t nearly as popular as these 20 stocks and hedge funds that were betting on ACM were disappointed as the stock returned -0.8% during the third quarter and underperformed the market. If you are interested in investing in large cap stocks with huge upside potential, you should check out the top 20 most popular stocks among hedge funds as many of these stocks already outperformed the market so far this year.

Were Hedge Funds Right About Tuning Out Best Buy Co., Inc. (BBY)?
Monthly Newsletter Strategy
Download a free copy of our newsletter and see the details inside!
Hedge Fund Resource Center
Related News
Here’s What Hedge Funds Think About AECOM (ACM) Did Hedge Funds Drop The Ball On AECOM (ACM)? Do Hedge Funds Love AECOM (ACM)? 12 Largest Construction Companies in US in 2017 5 Best Airport and Infrastructure Stocks To Buy Under President Trump 10 Largest Construction Companies in NY and NJ Here’s What Is Going On In The Financial Markets Today? 11 Largest Auto Insurance Companies In The US In 2019 10 Poorest Cities in America in 2019 8 Lowest Tar and Nicotine Cigarette Brands in 2019
Billionaire Hedge Funds