Although the masses and most of the financial media blame hedge funds for their exorbitant fee structure and disappointing performance, these investors have proved to have great stock picking abilities over the years (that’s why their assets under management continue to swell). We believe hedge fund sentiment should serve as a crucial tool of an individual investor’s stock selection process, as it may offer great insights of how the brightest minds of the finance industry feel about specific stocks. After all, these people have access to smartest analysts and expensive data/information sources that individual investors can’t match. So should one consider investing in AECOM (NYSE:ACM)? The smart money sentiment can provide an answer to this question.

AECOM (NYSE:ACM) has seen a decrease in support from the world’s most elite money managers recently. Our calculations also showed that acm isn’t among the 30 most popular stocks among hedge funds.

Let’s take a peek at the new hedge fund action regarding AECOM (NYSE:ACM).

How have hedgies been trading AECOM (NYSE:ACM)? 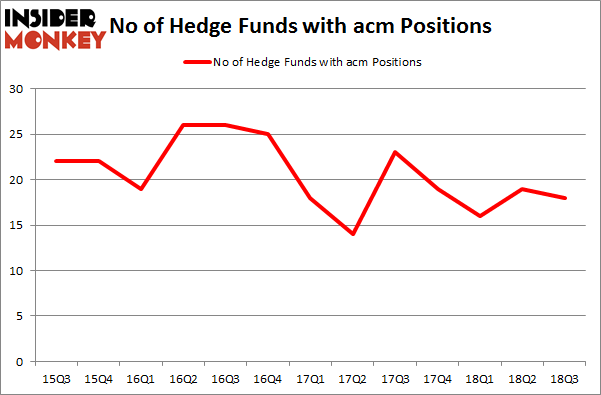 According to Insider Monkey’s hedge fund database, Luminus Management, managed by Jonathan Barrett and Paul Segal, holds the number one position in AECOM (NYSE:ACM). Luminus Management has a $97 million position in the stock, comprising 2% of its 13F portfolio. The second largest stake is held by Richard S. Pzena of Pzena Investment Management, with a $79.2 million position; 0.4% of its 13F portfolio is allocated to the stock. Some other professional money managers that are bullish comprise Edgar Wachenheim’s Greenhaven Associates, Martin D. Sass’s MD Sass and Israel Englander’s Millennium Management.

Because AECOM (NYSE:ACM) has faced a decline in interest from the entirety of the hedge funds we track, it’s safe to say that there lies a certain “tier” of hedge funds that slashed their positions entirely heading into Q3. It’s worth mentioning that Matthew Tewksbury’s Stevens Capital Management dumped the largest stake of the “upper crust” of funds followed by Insider Monkey, valued at about $1.7 million in stock. Mark Coe’s fund, Coe Capital Management, also dumped its stock, about $1.6 million worth. These transactions are interesting, as total hedge fund interest dropped by 1 funds heading into Q3.

As you can see these stocks had an average of 25.5 hedge funds with bullish positions and the average amount invested in these stocks was $632 million. That figure was $294 million in ACM’s case. Ashland Global Holdings Inc.. (NYSE:ASH) is the most popular stock in this table. On the other hand The Hanover Insurance Group, Inc. (NYSE:THG) is the least popular one with only 18 bullish hedge fund positions. Compared to these stocks AECOM (NYSE:ACM) is even less popular than THG. Considering that hedge funds aren’t fond of this stock in relation to other companies analyzed in this article, it may be a good idea to analyze it in detail and understand why the smart money isn’t behind this stock. This isn’t necessarily bad news. Although it is possible that hedge funds may think the stock is overpriced and view the stock as a short candidate, they may not be very familiar with the bullish thesis. In either case more research is warranted.

Should You Buy Genomic Health, Inc. (GHDX)?
Monthly Newsletter Strategy
Download a free copy of our newsletter and see the details inside!
Hedge Fund Resource Center
Related News
12 Largest Construction Companies in US in 2017 5 Best Airport and Infrastructure Stocks To Buy Under President Trump 10 Largest Construction Companies in NY and NJ Here’s What Is Going On In The Financial Markets Today? Is Aecom (ACM) A Good Stock To Buy? 10 NYSE Stocks Hitting 52-Week Highs Monday Pamplona Capital Is Heavily Betting On These 4 Companies for Q2 11 Countries With The Worst Modern Music In The World The Top 5 Robo Advisor Apps of 2018 Five Reasons You Need a Day-Trading Mentor
Billionaire Hedge Funds