Did Hedge Funds Drop The Ball On AECOM (ACM)?

AECOM (NYSE:ACM) shares haven’t seen a lot of action during the third quarter. Overall, hedge fund sentiment was unchanged. The stock was in 18 hedge funds’ portfolios at the end of December. At the end of this article we will also compare ACM to other stocks including Seaboard Corporation (NYSE:SEB), SYNNEX Corporation (NYSE:SNX), and Medidata Solutions Inc (NASDAQ:MDSO) to get a better sense of its popularity.

In today’s marketplace there are a lot of signals shareholders use to grade their stock investments. A pair of the most under-the-radar signals are hedge fund and insider trading sentiment. We have shown that, historically, those who follow the top picks of the best investment managers can outclass their index-focused peers by a significant amount (see the details here).

At Q4’s end, a total of 18 of the hedge funds tracked by Insider Monkey were long this stock, a change of 0% from one quarter earlier. By comparison, 16 hedge funds held shares or bullish call options in ACM a year ago. With hedge funds’ capital changing hands, there exists a select group of noteworthy hedge fund managers who were upping their stakes considerably (or already accumulated large positions). 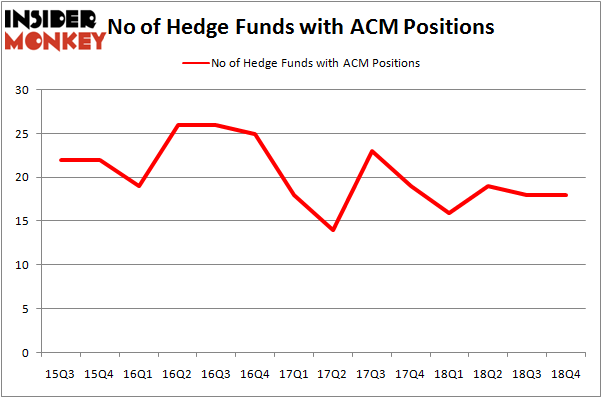 Among these funds, Luminus Management held the most valuable stake in AECOM (NYSE:ACM), which was worth $116.7 million at the end of the third quarter. On the second spot was Pzena Investment Management which amassed $85.9 million worth of shares. Moreover, Greenhaven Associates, Millennium Management, and MD Sass were also bullish on AECOM (NYSE:ACM), allocating a large percentage of their portfolios to this stock.

Judging by the fact that AECOM (NYSE:ACM) has witnessed falling interest from the entirety of the hedge funds we track, logic holds that there was a specific group of funds who sold off their positions entirely in the third quarter. At the top of the heap, Jim Simons’s Renaissance Technologies sold off the largest investment of the 700 funds followed by Insider Monkey, totaling an estimated $7.6 million in stock. Mark Coe’s fund, Coe Capital Management, also said goodbye to its stock, about $1.7 million worth. These moves are intriguing to say the least, as total hedge fund interest stayed the same (this is a bearish signal in our experience).

As you can see these stocks had an average of 9.5 hedge funds with bullish positions and the average amount invested in these stocks was $99 million. That figure was $322 million in ACM’s case. SYNNEX Corporation (NYSE:SNX) is the most popular stock in this table. On the other hand Compañía de Minas Buenaventura S.A.A. (NYSE:BVN) is the least popular one with only 6 bullish hedge fund positions. Compared to these stocks AECOM (NYSE:ACM) is more popular among hedge funds. Our calculations showed that top 15 most popular stocks) among hedge funds returned 24.2% through April 22nd and outperformed the S&P 500 ETF (SPY) by more than 7 percentage points. Hedge funds were also right about betting on ACM, though not to the same extent, as the stock returned 23.8% and outperformed the market as well.