At Insider Monkey, we pore over the filings of nearly 750 top investment firms every quarter, a process we have now completed for the latest reporting period. The data we’ve gathered as a result gives us access to a wealth of collective knowledge based on these firms’ portfolio holdings as of December 31. In this article, we will use that wealth of knowledge to determine whether or not Lennar Corporation (NYSE:LEN) makes for a good investment right now.

Is Lennar Corporation (NYSE:LEN) a splendid stock to buy now? The best stock pickers are getting less optimistic. The number of long hedge fund bets dropped by 4 in recent months. Our calculations also showed that LEN isn’t among the 30 most popular stocks among hedge funds. LEN was in 62 hedge funds’ portfolios at the end of the fourth quarter of 2018. There were 66 hedge funds in our database with LEN holdings at the end of the previous quarter.

What does the smart money think about Lennar Corporation (NYSE:LEN)?

At the end of the fourth quarter, a total of 62 of the hedge funds tracked by Insider Monkey were long this stock, a change of -6% from one quarter earlier. By comparison, 65 hedge funds held shares or bullish call options in LEN a year ago. With the smart money’s positions undergoing their usual ebb and flow, there exists an “upper tier” of notable hedge fund managers who were boosting their stakes substantially (or already accumulated large positions). 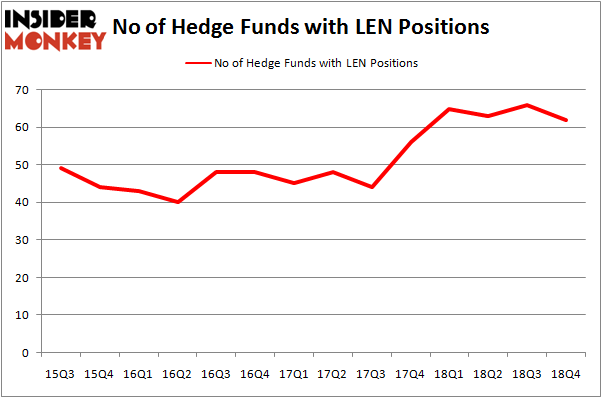 According to Insider Monkey’s hedge fund database, Greenhaven Associates, managed by Edgar Wachenheim, holds the biggest position in Lennar Corporation (NYSE:LEN). Greenhaven Associates has a $366.1 million position in the stock, comprising 7.1% of its 13F portfolio. Coming in second is Eminence Capital, managed by Ricky Sandler, which holds a $148.4 million position; 2.9% of its 13F portfolio is allocated to the stock. Some other hedge funds and institutional investors that are bullish comprise Glenn Greenberg’s Brave Warrior Capital, Gavin M. Abrams’s Abrams Bison Investments and Martin Whitman’s Third Avenue Management.

Seeing as Lennar Corporation (NYSE:LEN) has experienced bearish sentiment from the entirety of the hedge funds we track, logic holds that there is a sect of hedge funds that decided to sell off their full holdings last quarter. It’s worth mentioning that Dan Loeb’s Third Point sold off the biggest investment of all the hedgies monitored by Insider Monkey, totaling about $241.4 million in stock, and Jonathan Litt’s Land & Buildings Investment Management was right behind this move, as the fund cut about $40.5 million worth. These moves are intriguing to say the least, as total hedge fund interest fell by 4 funds last quarter.

As you can see these stocks had an average of 26.5 hedge funds with bullish positions and the average amount invested in these stocks was $785 million. That figure was $1693 million in LEN’s case. MGM Resorts International (NYSE:MGM) is the most popular stock in this table. On the other hand Coca-Cola FEMSA, S.A.B. de C.V. (NYSE:KOF) is the least popular one with only 6 bullish hedge fund positions. Compared to these stocks Lennar Corporation (NYSE:LEN) is more popular among hedge funds. Considering that hedge funds are fond of this stock in relation to its market cap peers, it may be a good idea to analyze it in detail and potentially include it in your portfolio. Our calculations showed that top 15 most popular stocks among hedge funds returned 19.7% through March 15th and outperformed the S&P 500 ETF (SPY) by 6.6 percentage points. Hedge funds were also right about betting on LEN as the stock returned 22% and outperformed the market as well.