At Insider Monkey, we pore over the filings of more than 700 top investment firms every quarter, a process we have now completed for the latest reporting period. The data we’ve gathered as a result gives us access to a wealth of collective knowledge based on these firms’ portfolio holdings as of September 30. In this article, we will use that wealth of knowledge to determine whether or not Lennar Corporation (NYSE:LEN) makes for a good investment right now.

Lennar Corporation (NYSE:LEN) has experienced an increase in activity from the world’s largest hedge funds in recent months. Our calculations also showed that LEN isn’t among the 30 most popular stocks among hedge funds.

In the financial world there are a large number of tools shareholders have at their disposal to analyze stocks. Two of the most innovative tools are hedge fund and insider trading sentiment. Our researchers have shown that, historically, those who follow the top picks of the elite fund managers can outclass the S&P 500 by a solid margin (see the details here).

We’re going to take a glance at the new hedge fund action regarding Lennar Corporation (NYSE:LEN).

What have hedge funds been doing with Lennar Corporation (NYSE:LEN)?

At the end of the third quarter, a total of 66 of the hedge funds tracked by Insider Monkey were bullish on this stock, a change of 5% from the previous quarter. The graph below displays the number of hedge funds with bullish position in LEN over the last 13 quarters. With hedgies’ capital changing hands, there exists a select group of noteworthy hedge fund managers who were boosting their stakes significantly (or already accumulated large positions). 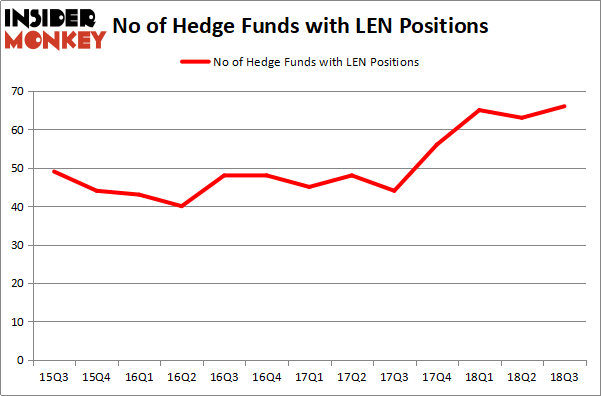 More specifically, Greenhaven Associates was the largest shareholder of Lennar Corporation (NYSE:LEN), with a stake worth $433.5 million reported as of the end of September. Trailing Greenhaven Associates was Eminence Capital, which amassed a stake valued at $400.8 million. Third Point, Long Pond Capital, and Viking Global were also very fond of the stock, giving the stock large weights in their portfolios.

As aggregate interest increased, key money managers were breaking ground themselves. Luxor Capital Group, managed by Christian Leone, established the most valuable call position in Lennar Corporation (NYSE:LEN). Luxor Capital Group had $106.9 million invested in the company at the end of the quarter. Glenn Greenberg’s Brave Warrior Capital also made a $103.4 million investment in the stock during the quarter. The other funds with new positions in the stock are Paul Marshall and Ian Wace’s Marshall Wace LLP, Clint Murray’s Lodge Hill Capital, and Robert Pohly’s Samlyn Capital.

Let’s go over hedge fund activity in other stocks – not necessarily in the same industry as Lennar Corporation (NYSE:LEN) but similarly valued. We will take a look at Broadridge Financial Solutions, Inc. (NYSE:BR), Mettler-Toledo International Inc. (NYSE:MTD), CoStar Group Inc (NASDAQ:CSGP), and Liberty Broadband Corp (NASDAQ:LBRDA). All of these stocks’ market caps are similar to LEN’s market cap.

As you can see these stocks had an average of 25 hedge funds with bullish positions and the average amount invested in these stocks was $588 million. That figure was $2818 million in LEN’s case. Broadridge Financial Solutions, Inc. (NYSE:BR) is the most popular stock in this table. On the other hand Mettler-Toledo International Inc. (NYSE:MTD) is the least popular one with only 16 bullish hedge fund positions. Compared to these stocks Lennar Corporation (NYSE:LEN) is more popular among hedge funds. Considering that hedge funds are fond of this stock in relation to its market cap peers, it may be a good idea to analyze it in detail and potentially include it in your portfolio.