Is Lennar Corporation (LEN) A Good Stock To Buy?

Most investors tend to think that hedge funds and other asset managers are worthless, as they cannot beat even simple index fund portfolios. In fact, most people expect hedge funds to compete with and outperform the bull market that we have witnessed over the past few years. However, hedge funds are generally partially hedged and aim at delivering attractive risk-adjusted returns rather than following the ups and downs of equity markets hoping that they will outperform the broader market. Our research shows that hedge funds do have great stock picking skills, so let’s take a glance at the smart money sentiment towards Lennar Corporation (NYSE:LEN).

Homebuilder Lennar Corporation (NYSE:LEN) is extremely popular among hedge funds, regardless of a small dip in ownership during Q2. 63 of the hedge funds in our system were long the stock at the end of June, owning 21.8% of its shares. Ricky Sandler’s Eminence Capital (12.48 million shares) owned the largest position in Lennar on June 30, and billionaire money managers like Dan Loeb’s Third Point (6 million shares) and Andreas Halvorsen’s Viking Global (5.43 million shares) also love it, being one of the 25 Stocks Billionaires Are Piling On.

In the 21st century investor’s toolkit there are a multitude of formulas shareholders use to size up stocks. A duo of the most underrated formulas are hedge fund and insider trading indicators. Our researchers have shown that, historically, those who follow the best picks of the top fund managers can outclass the market by a healthy amount (see the details here). 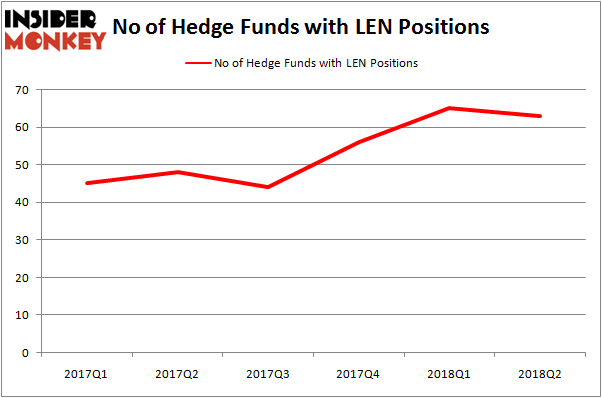 The largest stake in Lennar Corporation (NYSE:LEN) was held by Eminence Capital, which reported holding $655.3 million worth of stock as of the end of June. It was followed by Greenhaven Associates with a $486.4 million position. Other investors bullish on the company included Bronson Point Partners, Land & Buildings Investment Management, and Covalent Capital Partners.

Seeing as Lennar Corporation (NYSE:LEN) has faced declining sentiment from the aggregate hedge fund industry, it’s easy to see that there lies a certain “tier” of funds that decided to sell off their entire stakes by the end of the second quarter. Glenn J. Krevlin’s fund, Glenhill Advisors, said goodbye to its call options, about $43.4 million worth, as hedge fund ownership dropped by 2 during the second quarter.

As you can see these stocks had an average of 17 hedge funds with bullish positions and the average amount invested in these stocks was $772 million. That figure was $3.76 billion in LEN’s case. FirstEnergy Corp. (NYSE:FE) is the most popular stock in this table. On the other hand Spectra Energy Partners, LP (NYSE:SEP) is the least popular one with only 6 bullish hedge fund positions. Compared to these stocks Lennar Corporation (NYSE:LEN) is far more popular among hedge funds. Considering that hedge funds and billionaires are very bullish on this stock in relation to its market cap peers, it may be a good idea to analyze it in detail and potentially include it in your portfolio.