While the market driven by short-term sentiment influenced by the accomodative interest rate environment in the US, increasing oil prices and deteriorating expectations towards the resolution of the trade war with China, many smart money investors kept their cautious approach regarding the current bull run in the third quarter and hedging or reducing many of their long positions. Some fund managers are betting on Dow hitting 40,000 to generate strong returns. However, as we know, big investors usually buy stocks with strong fundamentals that can deliver gains both in bull and bear markets, which is why we believe we can profit from imitating them. In this article, we are going to take a look at the smart money sentiment surrounding Liberty Global plc (NASDAQ:LBTYA).

Liberty Global plc (NASDAQ:LBTYA) shares haven’t seen a lot of action during the third quarter. Overall, hedge fund sentiment was unchanged. The stock was in 27 hedge funds’ portfolios at the end of September. The level and the change in hedge fund popularity aren’t the only variables you need to analyze to decipher hedge funds’ perspectives. A stock may witness a boost in popularity but it may still be less popular than similarly priced stocks. That’s why at the end of this article we will examine companies such as Horizon Therapeutics Public Limited Company (NASDAQ:HZNP), Avalara, Inc. (NYSE:AVLR), and Turkcell Iletisim Hizmetleri A.S. (NYSE:TKC) to gather more data points. Our calculations also showed that LBTYA isn’t among the 30 most popular stocks among hedge funds (click for Q3 rankings and see the video below for Q2 rankings).

Unlike the largest US hedge funds that are convinced Dow will soar past 40,000 or the world’s most bearish hedge fund that’s more convinced than ever that a crash is coming, our long-short investment strategy doesn’t rely on bull or bear markets to deliver double digit returns. We only rely on the best performing hedge funds‘ buy/sell signals. Let’s take a peek at the key hedge fund action surrounding Liberty Global plc (NASDAQ:LBTYA).

How have hedgies been trading Liberty Global plc (NASDAQ:LBTYA)? 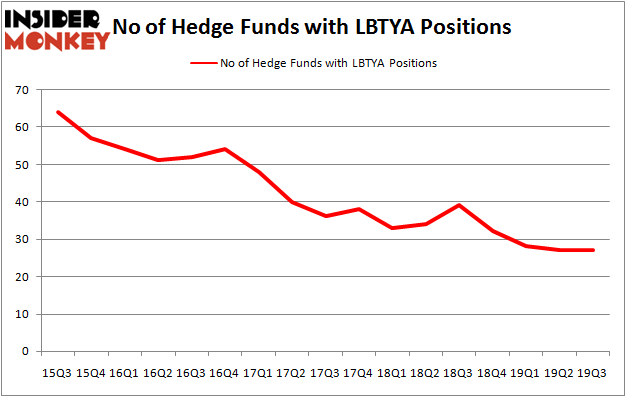 Among these funds, Berkshire Hathaway held the most valuable stake in Liberty Global plc (NASDAQ:LBTYA), which was worth $489.8 million at the end of the third quarter. On the second spot was Route One Investment Company which amassed $218.5 million worth of shares. Baupost Group, Alatus Capital, and Manor Road Capital Partners were also very fond of the stock, becoming one of the largest hedge fund holders of the company. In terms of the portfolio weights assigned to each position Alatus Capital allocated the biggest weight to Liberty Global plc (NASDAQ:LBTYA), around 54.66% of its portfolio. Manor Road Capital Partners is also relatively very bullish on the stock, designating 16.73 percent of its 13F equity portfolio to LBTYA.

Judging by the fact that Liberty Global plc (NASDAQ:LBTYA) has witnessed declining sentiment from the smart money, it’s safe to say that there was a specific group of money managers that slashed their positions entirely heading into Q4. It’s worth mentioning that Farallon Capital dumped the largest stake of the “upper crust” of funds tracked by Insider Monkey, comprising close to $56.2 million in stock. Ricky Sandler’s fund, Eminence Capital, also dumped its stock, about $14.1 million worth. These moves are interesting, as aggregate hedge fund interest stayed the same (this is a bearish signal in our experience).

As you can see these stocks had an average of 24.25 hedge funds with bullish positions and the average amount invested in these stocks was $659 million. That figure was $1292 million in LBTYA’s case. Avalara, Inc. (NYSE:AVLR) is the most popular stock in this table. On the other hand Turkcell Iletisim Hizmetleri A.S. (NYSE:TKC) is the least popular one with only 5 bullish hedge fund positions. Liberty Global plc (NASDAQ:LBTYA) is not the most popular stock in this group but hedge fund interest is still above average. This is a slightly positive signal but we’d rather spend our time researching stocks that hedge funds are piling on. Our calculations showed that top 20 most popular stocks among hedge funds returned 37.4% in 2019 through the end of November and outperformed the S&P 500 ETF (SPY) by 9.9 percentage points. Unfortunately LBTYA wasn’t nearly as popular as these 20 stocks and hedge funds that were betting on LBTYA were disappointed as the stock returned -8.9% during the fourth quarter (through the end of November) and underperformed the market. If you are interested in investing in large cap stocks with huge upside potential, you should check out the top 20 most popular stocks among hedge funds as many of these stocks already outperformed the market so far this year.