Is Liberty Global plc (NASDAQ:LBTYA) a buy, sell, or hold? Hedge funds are taking a pessimistic view. The number of long hedge fund positions went down by 7 in recent months. Our calculations also showed that LBTYA isn’t among the 30 most popular stocks among hedge funds. 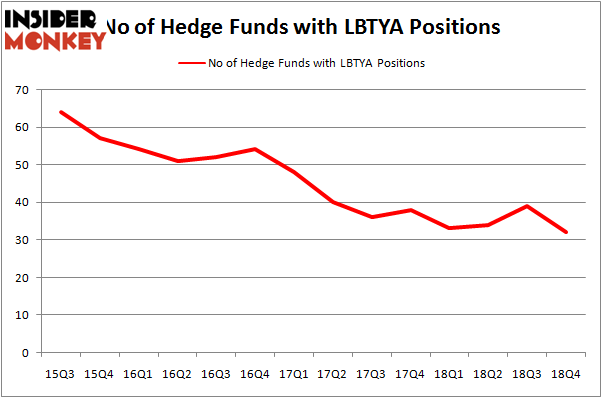 According to Insider Monkey’s hedge fund database, Warren Buffett’s Berkshire Hathaway has the most valuable position in Liberty Global plc (NASDAQ:LBTYA), worth close to $422.3 million, accounting for 0.2% of its total 13F portfolio. The second most bullish fund manager is William Duhamel of Route One Investment Company, with a $190.7 million position; 6.9% of its 13F portfolio is allocated to the company. Remaining peers that are bullish comprise Farallon Capital, Larry Robbins’s Glenview Capital and Seth Klarman’s Baupost Group.

Judging by the fact that Liberty Global plc (NASDAQ:LBTYA) has witnessed declining sentiment from hedge fund managers, it’s safe to say that there exists a select few hedgies that elected to cut their full holdings heading into Q3. Interestingly, Steve Cohen’s Point72 Asset Management dumped the biggest investment of all the hedgies monitored by Insider Monkey, valued at close to $15.6 million in stock. Jonathon Jacobson’s fund, Highfields Capital Management, also cut its stock, about $13.4 million worth. These bearish behaviors are interesting, as aggregate hedge fund interest fell by 7 funds heading into Q3.

As you can see these stocks had an average of 27.25 hedge funds with bullish positions and the average amount invested in these stocks was $732 million. That figure was $1236 million in LBTYA’s case. IDEXX Laboratories, Inc. (NASDAQ:IDXX) is the most popular stock in this table. On the other hand Ameren Corporation (NYSE:AEE) is the least popular one with only 23 bullish hedge fund positions. Liberty Global plc (NASDAQ:LBTYA) is not the most popular stock in this group but hedge fund interest is still above average. Our calculations showed that top 15 most popular stocks among hedge funds returned 19.7% through March 15th and outperformed the S&P 500 ETF (SPY) by 6.6 percentage points. Hedge funds were also right about betting on Liberty Global as the stock returned 22% and outperformed the market as well.