Here is the 28th Most Popular Stock Among Hedge Funds

Hedge funds are not perfect. They have their bad picks just like everyone else. Facebook, a stock hedge funds have loved dearly, lost nearly 40% of its value at one point in 2018. Although hedge funds are not perfect, their consensus picks do deliver solid returns. Our data show the top 20 S&P 500 stocks among hedge funds beat the S&P 500 Index by more than 6 percentage points so far in 2019. Because hedge funds have a lot of resources and their consensus picks do well, we pay attention to what they think. In this article, we analyze what the elite funds think of PG&E Corporation (NYSE:PCG).

PG&E Corporation (NYSE:PCG) has seen an increase in activity from the world’s largest hedge funds of late. Our calculations also showed that PCG ranked 28th among the 30 most popular stocks among hedge funds. Overall hedge fund sentiment towards PCG has never been this high. This is usually a bullish sign. We observed this in three other stocks: Disney Worldpay, and Adobe Systems. Disney outperformed the market by 20 percentage points whereas Worldpay and Adobe beat it by 8 and 4 points respectively in Q2.

At the moment there are a large number of tools stock traders employ to assess publicly traded companies. Two of the most useful tools are hedge fund and insider trading moves. We have shown that, historically, those who follow the best picks of the elite investment managers can beat the market by a significant amount (see the details here).

How have hedgies been trading PG&E Corporation (NYSE:PCG)?

At the end of the first quarter, a total of 72 of the hedge funds tracked by Insider Monkey were bullish on this stock, a change of 24% from the previous quarter. By comparison, 50 hedge funds held shares or bullish call options in PCG a year ago. With the smart money’s positions undergoing their usual ebb and flow, there exists a select group of noteworthy hedge fund managers who were adding to their stakes significantly (or already accumulated large positions). 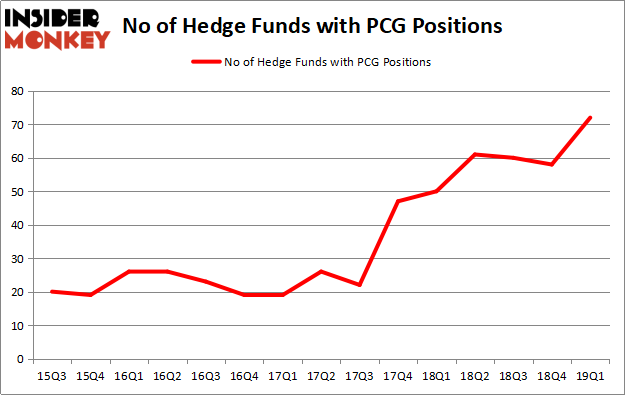 As you can see these stocks had an average of 30.5 hedge funds with bullish positions and the average amount invested in these stocks was $1012 million. That figure was $4787 million in PCG’s case. Okta, Inc. (NASDAQ:OKTA) is the most popular stock in this table. On the other hand Erie Indemnity Company (NASDAQ:ERIE) is the least popular one with only 17 bullish hedge fund positions. Compared to these stocks PG&E Corporation (NYSE:PCG) is more popular among hedge funds. Our calculations showed that top 20 most popular stocks among hedge funds returned 1.9% in Q2 through May 30th and outperformed the S&P 500 ETF (SPY) by more than 3 percentage points. Hedge funds were also right about betting on PCG, though not to the same extent, as the stock returned -0.1% during the same period and outperformed the market as well.