As we already know from media reports and hedge fund investor letters, many hedge funds lost money in fourth quarter, blaming macroeconomic conditions and unpredictable events that hit several sectors, with technology among them. Nevertheless, most hedge fund managers decided to stick to their bullish theses and recouped their losses by the end of the first quarter. We get to see hedge funds’ thoughts towards the market and individual stocks by aggregating their quarterly portfolio movements and reading their investor letters. In this article, we will particularly take a look at what hedge funds think about The Walt Disney Company (NYSE:DIS).

Is The Walt Disney Company (NYSE:DIS) a healthy stock for your portfolio? Hedge funds are in an extremely bullish mood. The number of long hedge fund bets rose by 43 in recent months. Our calculations also showed that DIS isn’t among the 30 most popular stocks among hedge funds. DIS was in 114 hedge funds’ portfolios at the end of March. There were 71 hedge funds in our database with DIS holdings at the end of the previous quarter.

In the financial world there are tons of methods stock market investors have at their disposal to appraise their stock investments. A duo of the most underrated methods are hedge fund and insider trading indicators. Our researchers have shown that, historically, those who follow the top picks of the best money managers can outpace the broader indices by a solid amount (see the details here). 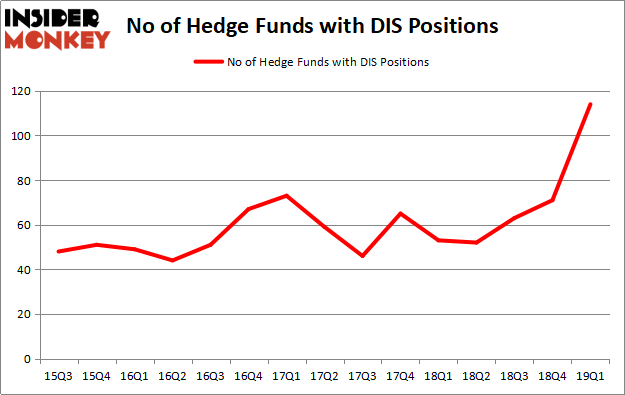 Among these funds, Point72 Asset Management held the most valuable stake in The Walt Disney Company (NYSE:DIS), which was worth $1142.1 million at the end of the first quarter. On the second spot was D1 Capital Partners which amassed $701.7 million worth of shares. Moreover, Millennium Management, Yacktman Asset Management, and Citadel Investment Group were also bullish on The Walt Disney Company (NYSE:DIS), allocating a large percentage of their portfolios to this stock.

As you can see these stocks had an average of 50 hedge funds with bullish positions and the average amount invested in these stocks was $3982 million. That figure was $7046 million in DIS’s case. Comcast Corporation (NASDAQ:CMCSA) is the most popular stock in this table. On the other hand Toyota Motor Corporation (NYSE:TM) is the least popular one with only 10 bullish hedge fund positions. Compared to these stocks The Walt Disney Company (NYSE:DIS) is more popular among hedge funds. Our calculations showed that top 20 most popular stocks among hedge funds returned 1.9% in Q2 through May 30th and outperformed the S&P 500 ETF (SPY) by more than 3 percentage points. Hedge funds were also right about betting on DIS as the stock returned 19.1% during the same period and outperformed the market by an even larger margin. Hedge funds were clearly right about piling into this stock relative to other stocks with similar market capitalizations.