It is already common knowledge that individual investors do not usually have the necessary resources and abilities to properly research an investment opportunity. As a result, most investors pick their illusory “winners” by making a superficial analysis and research that leads to poor performance on aggregate. Since stock returns aren’t usually symmetrically distributed and index returns are more affected by a few outlier stocks (i.e. the FAANG stocks dominating and driving S&P 500 Index’s returns in recent years), more than 50% of the constituents of the Standard and Poor’s 500 Index underperform the benchmark. Hence, if you randomly pick a stock, there is more than 50% chance that you’d fail to beat the market. At the same time, the 20 most favored S&P 500 stocks by the hedge funds monitored by Insider Monkey generated an outperformance of 6 percentage points during the first 5 months of 2019. Of course, hedge funds do make wrong bets on some occasions and these get disproportionately publicized on financial media, but piggybacking their moves can beat the broader market on average. That’s why we are going to go over recent hedge fund activity in Worldpay, Inc. (NYSE:WP).

Worldpay, Inc. (NYSE:WP) was in 75 hedge funds’ portfolios at the end of March. WP has seen an increase in support from the world’s most elite money managers recently. There were 48 hedge funds in our database with WP holdings at the end of the previous quarter. Our calculations also showed that WP ranked 24th among the 30 most popular stocks among hedge funds. Hedge fund sentiment towards WP has never been this high. This is usually a very bullish sign. For example, hedge fund sentiment towards Disney hit its all time high in Q1 and the stock outperformed the market by 20 percentage points in Q2.

To the average investor there are dozens of signals shareholders have at their disposal to size up stocks. Some of the most under-the-radar signals are hedge fund and insider trading indicators. We have shown that, historically, those who follow the best picks of the best hedge fund managers can beat the S&P 500 by a significant amount (see the details here).

How have hedgies been trading Worldpay, Inc. (NYSE:WP)?

At Q1’s end, a total of 75 of the hedge funds tracked by Insider Monkey were long this stock, a change of 56% from the previous quarter. The graph below displays the number of hedge funds with bullish position in WP over the last 15 quarters. With hedge funds’ positions undergoing their usual ebb and flow, there exists a select group of notable hedge fund managers who were boosting their holdings substantially (or already accumulated large positions). 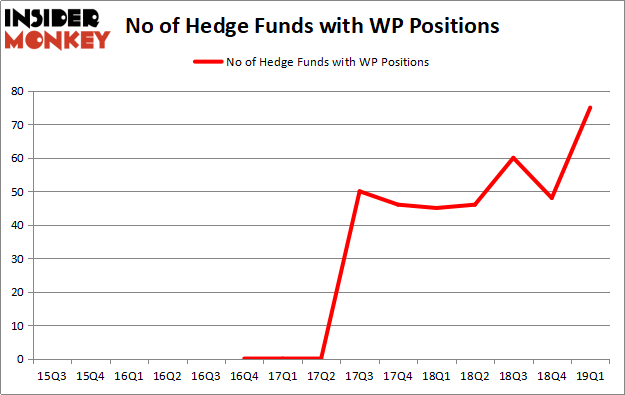 The largest stake in Worldpay, Inc. (NYSE:WP) was held by Select Equity Group, which reported holding $525.8 million worth of stock at the end of March. It was followed by Citadel Investment Group with a $482.4 million position. Other investors bullish on the company included Diamond Hill Capital, Melvin Capital Management, and Steadfast Capital Management.

With a general bullishness amongst the heavyweights, specific money managers were leading the bulls’ herd. Magnetar Capital, managed by Alec Litowitz and Ross Laser, assembled the most valuable position in Worldpay, Inc. (NYSE:WP). Magnetar Capital had $235.2 million invested in the company at the end of the quarter. Robert Emil Zoellner’s Alpine Associates also initiated a $166.1 million position during the quarter. The other funds with brand new WP positions are Aaron Cowen’s Suvretta Capital Management, Robert Boucai’s Newbrook Capital Advisors, and Clint Carlson’s Carlson Capital.

As you can see these stocks had an average of 31.75 hedge funds with bullish positions and the average amount invested in these stocks was $1883 million. That figure was $5218 million in WP’s case. eBay Inc (NASDAQ:EBAY) is the most popular stock in this table. On the other hand Manulife Financial Corporation (NYSE:MFC) is the least popular one with only 16 bullish hedge fund positions. Compared to these stocks Worldpay, Inc. (NYSE:WP) is more popular among hedge funds. Our calculations showed that top 20 most popular stocks among hedge funds returned 1.9% in Q2 through May 30th and outperformed the S&P 500 ETF (SPY) by more than 3 percentage points. Hedge funds were also right about betting on WP as the stock returned 6.8% during the same period and outperformed the market by an even larger margin. Hedge funds were clearly right about piling into this stock relative to other stocks with similar market capitalizations.