How do we determine whether Adobe Systems Incorporated (NASDAQ:ADBE) makes for a good investment at the moment? We analyze the sentiment of a select group of the very best investors in the world, who spend immense amounts of time and resources studying companies. They may not always be right (no one is), but data shows that their consensus long positions have historically outperformed the market when we adjust for known risk factors.).

Adobe Systems Incorporated (NASDAQ:ADBE) has seen an increase in support from the world’s most elite money managers of late. Our calculations also showed that ADBE ranked 20th among the 30 most popular stocks among hedge funds. Overall hedge fund sentiment towards Adobe hit its all time high at the end of the first quarter. We observed this in two other stocks: Disney and Worldpay. Disney outperformed the market by 20 percentage points whereas Worldpay beat it by 8 points.

At the end of the first quarter, a total of 86 of the hedge funds tracked by Insider Monkey were long this stock, a change of 2% from one quarter earlier. Below, you can check out the change in hedge fund sentiment towards ADBE over the last 15 quarters. So, let’s see which hedge funds were among the top holders of the stock and which hedge funds were making big moves. 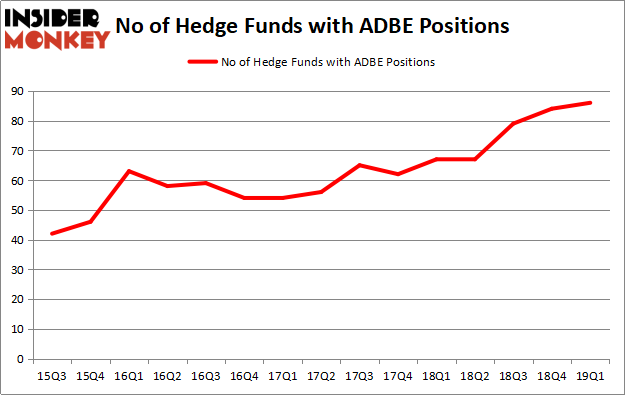 More specifically, Lone Pine Capital was the largest shareholder of Adobe Systems Incorporated (NASDAQ:ADBE), with a stake worth $1206.7 million reported as of the end of March. Trailing Lone Pine Capital was AQR Capital Management, which amassed a stake valued at $770.3 million. Egerton Capital Limited, Coatue Management, and Arrowstreet Capital were also very fond of the stock, giving the stock large weights in their portfolios.

With a general bullishness amongst the heavyweights, key hedge funds have jumped into Adobe Systems Incorporated (NASDAQ:ADBE) headfirst. Palestra Capital Management, managed by Andrew Immerman and Jeremy Schiffman, assembled the most outsized position in Adobe Systems Incorporated (NASDAQ:ADBE). Palestra Capital Management had $110.2 million invested in the company at the end of the quarter. Keith Meister’s Corvex Capital also made a $71.9 million investment in the stock during the quarter. The other funds with brand new ADBE positions are George Soros’s Soros Fund Management, David Tepper’s Appaloosa Management LP, and Sander Gerber’s Hudson Bay Capital Management.

Let’s check out hedge fund activity in other stocks – not necessarily in the same industry as Adobe Inc. (NASDAQ:ADBE) but similarly valued. We will take a look at Eli Lilly and Company (NYSE:LLY), International Business Machines Corp. (NYSE:IBM), Novo Nordisk A/S (NYSE:NVO), and Medtronic, Inc. (NYSE:MDT). All of these stocks’ market caps match ADBE’s market cap.

As you can see these stocks had an average of 41.25 hedge funds with bullish positions and the average amount invested in these stocks was $2223 million. That figure was $8966 million in ADBE’s case. Medtronic, Inc. (NYSE:MDT) is the most popular stock in this table. On the other hand Novo Nordisk A/S (NYSE:NVO) is the least popular one with only 25 bullish hedge fund positions. Compared to these stocks Adobe Systems Incorporated (NASDAQ:ADBE) is more popular among hedge funds. Our calculations showed that top 20 most popular stocks among hedge funds returned 1.9% in Q2 through May 30th and outperformed the S&P 500 ETF (SPY) by more than 3 percentage points. Hedge funds were also right about betting on ADBE as the stock returned 3% during the same period and outperformed the market by an even larger margin. Hedge funds were clearly right about piling into this stock relative to other stocks with similar market capitalizations.