Is PG&E Corporation (PCG) A Good Stock To Buy?

You probably know from experience that there is not as much information on small-cap companies as there is on large companies. Of course, this makes it really hard and difficult for individual investors to make a proper and accurate analysis of certain small-cap companies. However, well-known and successful hedge fund investors like Carl Icahn and George Soros hold the necessary resources and abilities to conduct an extensive stock analysis on small-cap stocks, which enable them to make millions of dollars by identifying potential winners within the small-cap galaxy of stocks. This represents the main reason why Insider Monkey takes notice of the hedge fund activity in these overlooked stocks.

PG&E Corporation (NYSE:PCG) was in 60 hedge funds’ portfolios at the end of September. PCG shareholders have witnessed a decrease in hedge fund sentiment of late. There were 61 hedge funds in our database with PCG positions at the end of the previous quarter. Our calculations also showed that PCG isn’t among the 30 most popular stocks among hedge funds.

To most investors, hedge funds are seen as unimportant, outdated financial vehicles of the past. While there are greater than 8000 funds trading at the moment, Our researchers choose to focus on the elite of this club, about 700 funds. It is estimated that this group of investors orchestrate the lion’s share of all hedge funds’ total asset base, and by watching their highest performing picks, Insider Monkey has deciphered numerous investment strategies that have historically exceeded Mr. Market. Insider Monkey’s flagship hedge fund strategy defeated the S&P 500 index by 6 percentage points per annum since its inception in May 2014 through early November 2018. We were able to generate large returns even by identifying short candidates. Our portfolio of short stocks lost 24% since February 2017 (through December 3rd) even though the market was up nearly 23% during the same period. We just shared a list of 11 short targets in our latest quarterly update. 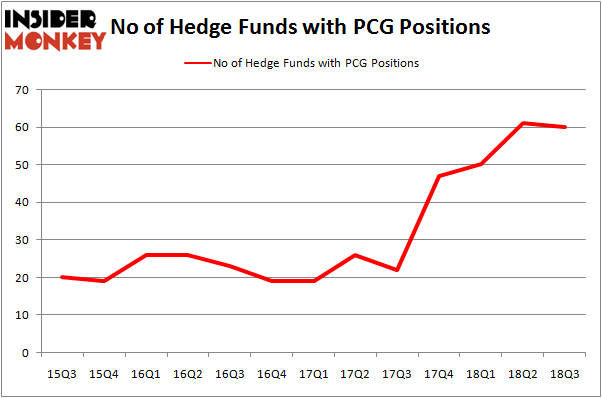 Among these funds, Baupost Group held the most valuable stake in PG&E Corporation (NYSE:PCG), which was worth $873.3 million at the end of the third quarter. On the second spot was Orbis Investment Management which amassed $382.2 million worth of shares. Moreover, D E Shaw, Hound Partners, and Viking Global were also bullish on PG&E Corporation (NYSE:PCG), allocating a large percentage of their portfolios to this stock.

Since PG&E Corporation (NYSE:PCG) has faced falling interest from the smart money, it’s easy to see that there were a few money managers that decided to sell off their positions entirely last quarter. It’s worth mentioning that David Abrams’s Abrams Capital Management sold off the biggest investment of all the hedgies tracked by Insider Monkey, worth an estimated $166.5 million in stock, and Peter Rathjens, Bruce Clarke and John Campbell’s Arrowstreet Capital was right behind this move, as the fund dropped about $74.3 million worth. These bearish behaviors are important to note, as aggregate hedge fund interest was cut by 1 funds last quarter.

As you can see these stocks had an average of 21.5 hedge funds with bullish positions and the average amount invested in these stocks was $1005 million. That figure was $4736 million in PCG’s case. M&T Bank Corporation (NYSE:MTB) is the most popular stock in this table. On the other hand, Wipro Limited (NYSE:WIT) is the least popular one with only 8 bullish hedge fund positions. Compared to these stocks PG&E Corporation (NYSE:PCG) is more popular among hedge funds. Considering that hedge funds are fond of this stock in relation to its market cap peers, it may be a good idea to analyze it in detail and potentially include it in your portfolio.