Many investors, including Paul Tudor Jones or Stan Druckenmiller, have been saying before the Q4 market crash that the stock market is overvalued due to a low interest rate environment that leads to companies swapping their equity for debt and focusing mostly on short-term performance such as beating the quarterly earnings estimates. In the first quarter, most investors recovered all of their Q4 losses as sentiment shifted and optimism dominated the US China trade negotiations. Nevertheless, many of the stocks that delivered strong returns in the first quarter still sport strong fundamentals and their gains were more related to the general market sentiment rather than their individual performance and hedge funds kept their bullish stance. In this article we will find out how hedge fund sentiment to ANI Pharmaceuticals Inc (NASDAQ:ANIP) changed recently.

ANI Pharmaceuticals Inc (NASDAQ:ANIP) shareholders have witnessed an increase in support from the world’s most elite money managers lately. Overall hedge fund sentiment towards ANIP hit its all time high at the end of the first quarter. This is usually a bullish signal. We observed this in other stocks like Roku, Control4 Corp, Uniqure, Avalara, Lindblad Expeditions, and Disney. Roku returned returned 45%, Control4 Corp returned 40%, Uniqure and Avalara delivered a 30% gain each, and Disney outperformed the market by 23 percentage points in Q2.  Lindblad Expedition investors also experienced a relatively modest 15.2% gain during the same period.

In the 21st century investor’s toolkit there are a large number of gauges stock traders have at their disposal to size up stocks. A pair of the less known gauges are hedge fund and insider trading interest. Our researchers have shown that, historically, those who follow the best picks of the elite investment managers can outperform the market by a solid margin (see the details here).

At Q1’s end, a total of 17 of the hedge funds tracked by Insider Monkey held long positions in this stock, a change of 31% from the fourth quarter of 2018. On the other hand, there were a total of 11 hedge funds with a bullish position in ANIP a year ago. With hedgies’ positions undergoing their usual ebb and flow, there exists an “upper tier” of notable hedge fund managers who were boosting their stakes substantially (or already accumulated large positions). 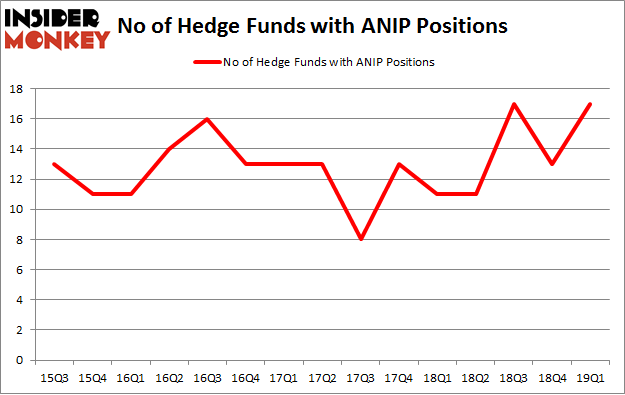 The largest stake in ANI Pharmaceuticals Inc (NASDAQ:ANIP) was held by Mangrove Partners, which reported holding $38.8 million worth of stock at the end of March. It was followed by Renaissance Technologies with a $14.1 million position. Other investors bullish on the company included Consonance Capital Management, Hawk Ridge Management, and Weiss Asset Management.

As one would reasonably expect, some big names have jumped into ANI Pharmaceuticals Inc (NASDAQ:ANIP) headfirst. Hawk Ridge Management, managed by David Brown, initiated the most outsized position in ANI Pharmaceuticals Inc (NASDAQ:ANIP). Hawk Ridge Management had $8.7 million invested in the company at the end of the quarter. Paul Marshall and Ian Wace’s Marshall Wace LLP also initiated a $0.8 million position during the quarter. The other funds with new positions in the stock are David Harding’s Winton Capital Management, Jeffrey Talpins’s Element Capital Management, and Gavin Saitowitz and Cisco J. del Valle’s Springbok Capital.

As you can see these stocks had an average of 12 hedge funds with bullish positions and the average amount invested in these stocks was $76 million. That figure was $82 million in ANIP’s case. Boot Barn Holdings Inc (NYSE:BOOT) is the most popular stock in this table. On the other hand Washington Trust Bancorp, Inc. (NASDAQ:WASH) is the least popular one with only 4 bullish hedge fund positions. ANI Pharmaceuticals Inc (NASDAQ:ANIP) is not the most popular stock in this group but hedge fund interest is still above average. Our calculations showed that top 20 most popular stocks among hedge funds returned 6.2% in Q2 through June 19th and outperformed the S&P 500 ETF (SPY) by nearly 3 percentage points. Hedge funds were also right about betting on ANIP as the stock returned around 13% so far in Q2 and outperformed the market as well.