Lindblad Expeditions Holdings Inc (NASDAQ:LIND) investors should be aware of an increase in activity from the world’s largest hedge funds lately. LIND was in 20 hedge funds’ portfolios at the end of the first quarter of 2019. There were 14 hedge funds in our database with LIND holdings at the end of the previous quarter. This is usually a bullish indicator. We observed this in other stocks like Roku, Uniqure, Avalara, and Disney. Roku returned returned 45%, Uniqure and Avalara delivered a 30% gain each, and Disney outperformed the market by 23 percentage points in Q2.

How have hedgies been trading Lindblad Expeditions Holdings Inc (NASDAQ:LIND)?

At the end of the first quarter, a total of 20 of the hedge funds tracked by Insider Monkey held long positions in this stock, a change of 43% from one quarter earlier. Below, you can check out the change in hedge fund sentiment towards LIND over the last 15 quarters. So, let’s review which hedge funds were among the top holders of the stock and which hedge funds were making big moves. 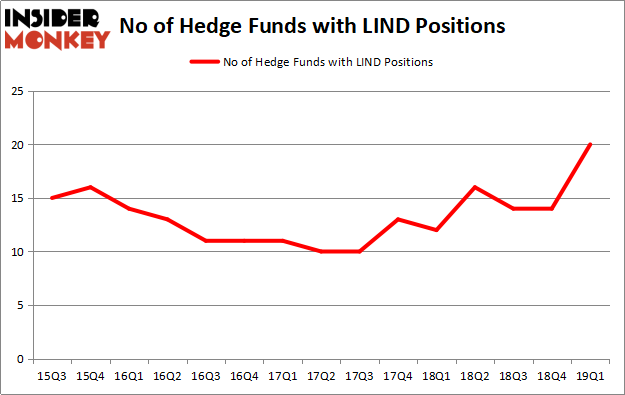 Among these funds, ValueAct Capital held the most valuable stake in Lindblad Expeditions Holdings Inc (NASDAQ:LIND), which was worth $44.1 million at the end of the first quarter. On the second spot was Royce & Associates which amassed $16.4 million worth of shares. Moreover, Deep Field Asset Management, Renaissance Technologies, and Rutabaga Capital Management were also bullish on Lindblad Expeditions Holdings Inc (NASDAQ:LIND), allocating a large percentage of their portfolios to this stock.

As one would reasonably expect, specific money managers were breaking ground themselves. Millennium Management, managed by Israel Englander, initiated the biggest position in Lindblad Expeditions Holdings Inc (NASDAQ:LIND). Millennium Management had $5.6 million invested in the company at the end of the quarter. Richard Driehaus’s Driehaus Capital also initiated a $5.2 million position during the quarter. The other funds with new positions in the stock are Peter Rathjens, Bruce Clarke and John Campbell’s Arrowstreet Capital, Bruce Kovner’s Caxton Associates LP, and David Harding’s Winton Capital Management.

As you can see these stocks had an average of 12.75 hedge funds with bullish positions and the average amount invested in these stocks was $75 million. That figure was $157 million in LIND’s case. TrueCar Inc (NASDAQ:TRUE) is the most popular stock in this table. On the other hand Northfield Bancorp Inc (NASDAQ:NFBK) is the least popular one with only 5 bullish hedge fund positions. Compared to these stocks Lindblad Expeditions Holdings Inc (NASDAQ:LIND) is more popular among hedge funds. Our calculations showed that top 20 most popular stocks among hedge funds returned 6.2% in Q2 through June 19th and outperformed the S&P 500 ETF (SPY) by nearly 3 percentage points. Hedge funds were also right about betting on LIND as the stock returned 15.2% during the same period and outperformed the market by an even larger margin. Hedge funds were clearly right about piling into this stock relative to other stocks with similar market capitalizations.