Hedge Funds Have Never Been This Bullish On Avalara, Inc. (AVLR)

Out of thousands of stocks that are currently traded on the market, it is difficult to identify those that will really generate strong returns. Hedge funds and institutional investors spend millions of dollars on analysts with MBAs and PhDs, who are industry experts and well connected to other industry and media insiders on top of that. Individual investors can piggyback the hedge funds employing these talents and can benefit from their vast resources and knowledge in that way. We analyze quarterly 13F filings of nearly 750 hedge funds and, by looking at the smart money sentiment that surrounds a stock, we can determine whether it has the potential to beat the market over the long-term. Therefore, let’s take a closer look at what smart money thinks about Avalara, Inc. (NYSE:AVLR).

Avalara, Inc. (NYSE:AVLR) was in 27 hedge funds’ portfolios at the end of March. AVLR investors should pay attention to an increase in hedge fund interest lately. There were 14 hedge funds in our database with AVLR holdings at the end of the previous quarter. Overall hedge fund sentiment towards AVLR is now at its all time high. This is usually a bullish signal. We observed this in other stocks like Roku, Uniqure, and Disney. Roku returned returned 45%, Uniqure delivered a 30% gain and Disney outperformed the market by 23 percentage points in Q2.

We’re going to take a glance at the latest hedge fund action regarding Avalara, Inc. (NYSE:AVLR). 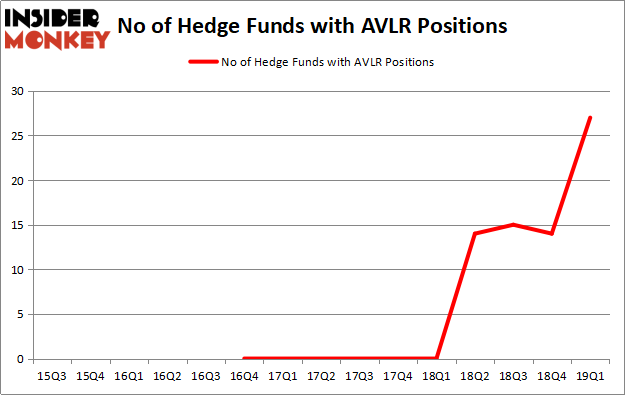 More specifically, Sageview Capital was the largest shareholder of Avalara, Inc. (NYSE:AVLR), with a stake worth $572.8 million reported as of the end of March. Trailing Sageview Capital was Alkeon Capital Management, which amassed a stake valued at $97.2 million. Tensile Capital, Tremblant Capital, and Shannon River Fund Management were also very fond of the stock, giving the stock large weights in their portfolios.

With a general bullishness amongst the heavyweights, key hedge funds have jumped into Avalara, Inc. (NYSE:AVLR) headfirst. Alkeon Capital Management, managed by Panayotis Takis Sparaggis, established the biggest position in Avalara, Inc. (NYSE:AVLR). Alkeon Capital Management had $97.2 million invested in the company at the end of the quarter. Brett Barakett’s Tremblant Capital also made a $42.8 million investment in the stock during the quarter. The other funds with new positions in the stock are Peter Rathjens, Bruce Clarke and John Campbell’s Arrowstreet Capital, Jeffrey Talpins’s Element Capital Management, and John Overdeck and David Siegel’s Two Sigma Advisors.

As you can see these stocks had an average of 21.5 hedge funds with bullish positions and the average amount invested in these stocks was $604 million. That figure was $890 million in AVLR’s case. Eagle Materials, Inc. (NYSE:EXP) is the most popular stock in this table. On the other hand Blackbaud, Inc. (NASDAQ:BLKB) is the least popular one with only 11 bullish hedge fund positions. Avalara, Inc. (NYSE:AVLR) is not the most popular stock in this group but hedge fund interest is still above average. Our calculations showed that top 20 most popular stocks among hedge funds returned 6.2% in Q2 through June 19th and outperformed the S&P 500 ETF (SPY) by nearly 3 percentage points. Hedge funds were also right about betting on AVLR as the stock returned 30.3% during the same period and outperformed the market by an even larger margin. Hedge funds were rewarded for their relative bullishness.