“Since 2006, value stocks (IVE vs IVW) have underperformed 11 of the 13 calendar years and when they beat growth, it wasn’t by much. Cumulatively, through this week, it has been a 122% differential (up 52% for value vs up 174% for growth). This appears to be the longest and most severe drought for value investors since data collection began. It will go our way eventually as there are too many people paying far too much for today’s darlings, both public and private. Further, the ten-year yield of 2.5% (pre-tax) isn’t attractive nor is real estate. We believe the value part of the global equity market is the only place to earn solid risk adjusted returns and we believe those returns will be higher than normal,” said Vilas Fund in its Q1 investor letter. We aren’t sure whether value stocks outperform growth, but we follow hedge fund investor letters to understand where the markets and stocks might be going. That’s why we believe it would be worthwhile to take a look at the hedge fund sentiment on Uniqure NV (NASDAQ:QURE) in order to identify whether reputable and successful top money managers continue to believe in its potential.

Uniqure NV (NASDAQ:QURE) investors should pay attention to a huge increase in hedge fund interest in recent months. Overall hedge fund sentiment towards QURE is now at its all time high. This is usually a bullish signal. We observed this in other stocks like Roku, Disney and Worldpay. Roku returned 45%, Disney outperformed the market by 20 percentage points whereas Worldpay beat it by 6 points.

Today there are dozens of gauges shareholders can use to assess their stock investments. A couple of the less known gauges are hedge fund and insider trading interest. Our researchers have shown that, historically, those who follow the top picks of the best hedge fund managers can beat the broader indices by a healthy margin (see the details here).

What does smart money think about Uniqure NV (NASDAQ:QURE)?

At the end of the first quarter, a total of 28 of the hedge funds tracked by Insider Monkey were bullish on this stock, a change of 65% from one quarter earlier. On the other hand, there were a total of 16 hedge funds with a bullish position in QURE a year ago. With the smart money’s positions undergoing their usual ebb and flow, there exists an “upper tier” of noteworthy hedge fund managers who were increasing their holdings substantially (or already accumulated large positions). 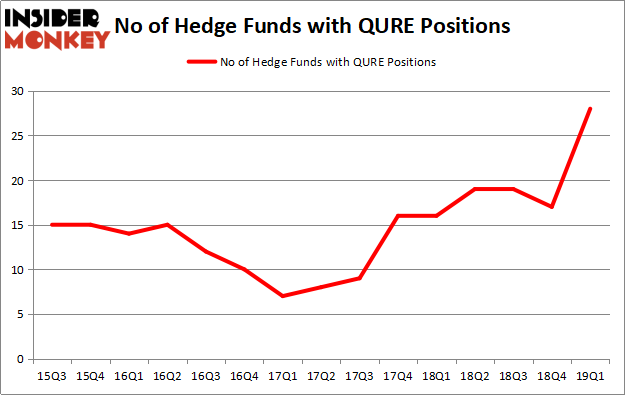 As one would reasonably expect, key hedge funds have been driving this bullishness. Partner Fund Management, managed by Christopher James, initiated the most valuable position in Uniqure NV (NASDAQ:QURE). Partner Fund Management had $24.9 million invested in the company at the end of the quarter. James A. Silverman’s Opaleye Management also initiated a $12.2 million position during the quarter. The other funds with new positions in the stock are Albert Cha and Frank Kung’s Vivo Capital, Jim Simons’s Renaissance Technologies, and Richard Mashaal’s Rima Senvest Management.

As you can see these stocks had an average of 16.25 hedge funds with bullish positions and the average amount invested in these stocks was $160 million. That figure was $530 million in QURE’s case. Wingstop Inc (NASDAQ:WING) is the most popular stock in this table. On the other hand Grupo Aeroportuario del Centro Norte, S.A.B. de C.V. (NASDAQ:OMAB) is the least popular one with only 6 bullish hedge fund positions. Compared to these stocks Uniqure NV (NASDAQ:QURE) is more popular among hedge funds. Our calculations showed that top 20 most popular stocks among hedge funds returned 6.2% in Q2 through June 19th and outperformed the S&P 500 ETF (SPY) by nearly 3 percentage points. Hedge funds were also right about betting on QURE as the stock returned 29.8% during the same period and outperformed the market by an even larger margin. Hedge funds were clearly right about piling into this stock relative to other stocks with similar market capitalizations.