Insider Monkey finished processing more than 700 13F filings submitted by hedge funds and prominent investors. These filings show these funds’ portfolio positions as of December 31st, 2018. In this article we are going to take a look at smart money sentiment towards Rexford Industrial Realty Inc (NYSE:REXR). 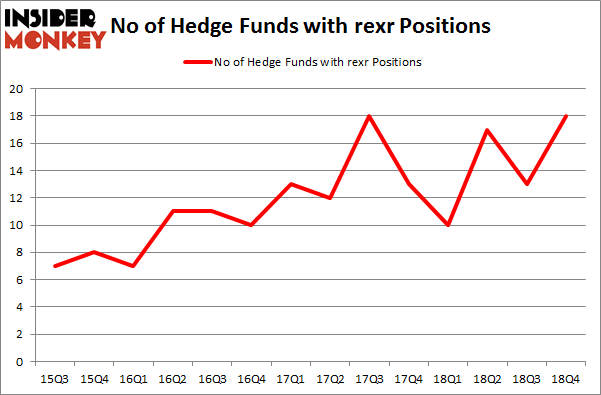 The largest stake in Rexford Industrial Realty Inc (NYSE:REXR) was held by AEW Capital Management, which reported holding $98.2 million worth of stock at the end of September. It was followed by Renaissance Technologies with a $57.8 million position. Other investors bullish on the company included Long Pond Capital, Carlson Capital, and Balyasny Asset Management.

As one would reasonably expect, key hedge funds have been driving this bullishness. D E Shaw, managed by D. E. Shaw, assembled the most outsized position in Rexford Industrial Realty Inc (NYSE:REXR). D E Shaw had $4.6 million invested in the company at the end of the quarter. David Costen Haley’s HBK Investments also initiated a $1.6 million position during the quarter. The other funds with brand new REXR positions are George Zweig, Shane Haas and Ravi Chander’s Signition LP and Gavin Saitowitz and Cisco J. del Valle’s Springbok Capital.

As you can see these stocks had an average of 18.75 hedge funds with bullish positions and the average amount invested in these stocks was $202 million. That figure was $285 million in REXR’s case. Kennametal Inc. (NYSE:KMT) is the most popular stock in this table. On the other hand National General Holdings Corp (NASDAQ:NGHC) is the least popular one with only 16 bullish hedge fund positions. Rexford Industrial Realty Inc (NYSE:REXR) is not the least popular stock in this group but hedge fund interest is still below average. Our calculations showed that top 15 most popular stocks) among hedge funds returned 24.2% through April 22nd and outperformed the S&P 500 ETF (SPY) by more than 7 percentage points. Hedge funds were also right about betting on REXR, though not to the same extent, as the stock returned 22.3% and outperformed the market as well.