How do we determine whether NIC Inc. (NASDAQ:EGOV) makes for a good investment at the moment? We analyze the sentiment of a select group of the very best investors in the world, who spend immense amounts of time and resources studying companies. They may not always be right (no one is), but data shows that their consensus long positions have historically outperformed the market when we adjust for known risk factors.

What have hedge funds been doing with NIC Inc. (NASDAQ:EGOV)? 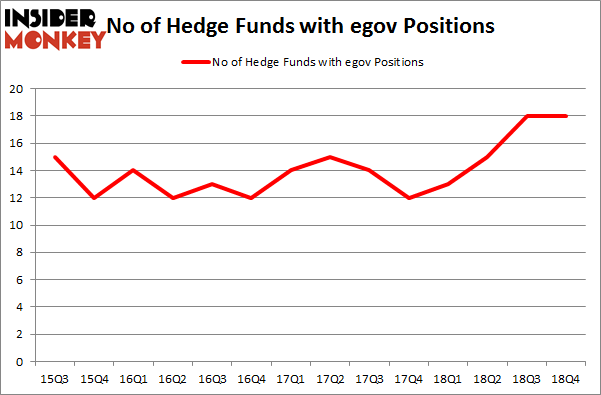 More specifically, D E Shaw was the largest shareholder of NIC Inc. (NASDAQ:EGOV), with a stake worth $15.2 million reported as of the end of September. Trailing D E Shaw was Marshall Wace LLP, which amassed a stake valued at $11.4 million. GLG Partners, Stadium Capital Management, and Citadel Investment Group were also very fond of the stock, giving the stock large weights in their portfolios.

Because NIC Inc. (NASDAQ:EGOV) has faced a decline in interest from the smart money, logic holds that there is a sect of money managers that elected to cut their entire stakes by the end of the third quarter. At the top of the heap, Michael Platt and William Reeves’s BlueCrest Capital Mgmt. dumped the largest investment of the 700 funds followed by Insider Monkey, worth close to $1.1 million in stock. Matthew Hulsizer’s fund, PEAK6 Capital Management, also dropped its stock, about $0.6 million worth. These bearish behaviors are intriguing to say the least, as aggregate hedge fund interest stayed the same (this is a bearish signal in our experience).

As you can see these stocks had an average of 20.75 hedge funds with bullish positions and the average amount invested in these stocks was $227 million. That figure was $68 million in EGOV’s case. InVitae Corporation (NYSE:NVTA) is the most popular stock in this table. On the other hand Fate Therapeutics Inc (NASDAQ:FATE) is the least popular one with only 15 bullish hedge fund positions. NIC Inc. (NASDAQ:EGOV) is not the least popular stock in this group but hedge fund interest is still below average. Our calculations showed that top 15 most popular stocks) among hedge funds returned 24.2% through April 22nd and outperformed the S&P 500 ETF (SPY) by more than 7 percentage points. Hedge funds were also right about betting on EGOV as the stock returned 36.3% and outperformed the market by an even larger margin.