Are Hedge Funds Going To Get Burned By CVR Energy, Inc. (CVI) ?

Is CVR Energy, Inc. (NYSE:CVI) a good equity to bet on right now? We like to check what the smart money thinks first before doing extensive research on a given stock. Although there have been several high profile failed hedge fund picks, the consensus picks among hedge fund investors have historically outperformed the market after adjusting for known risk attributes. It’s not surprising given that hedge funds have access to better information and more resources to predict the winners in the stock market.

Is CVR Energy, Inc. (NYSE:CVI) worth your attention right now? Hedge funds are in a pessimistic mood. The number of long hedge fund bets dropped by 3 recently. Our calculations also showed that CVI isn’t among the 30 most popular stocks among hedge funds.

Unlike some fund managers who are betting on Dow reaching 40000 in a year, our long-short investment strategy doesn’t rely on bull markets to deliver double digit returns. We only rely on hedge fund buy/sell signals. We’re going to analyze the recent hedge fund action surrounding CVR Energy, Inc. (NYSE:CVI).

At the end of the second quarter, a total of 19 of the hedge funds tracked by Insider Monkey were long this stock, a change of -14% from one quarter earlier. Below, you can check out the change in hedge fund sentiment towards CVI over the last 16 quarters. With the smart money’s positions undergoing their usual ebb and flow, there exists a few notable hedge fund managers who were increasing their stakes meaningfully (or already accumulated large positions). 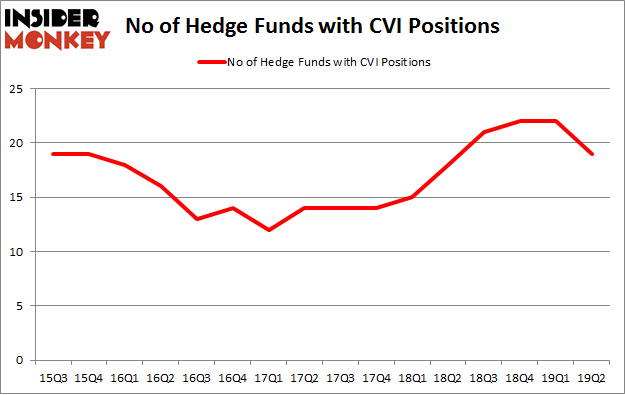 Among these funds, Icahn Capital LP held the most valuable stake in CVR Energy, Inc. (NYSE:CVI), which was worth $3559.2 million at the end of the second quarter. On the second spot was Renaissance Technologies which amassed $90.8 million worth of shares. Moreover, Millennium Management, AQR Capital Management, and Citadel Investment Group were also bullish on CVR Energy, Inc. (NYSE:CVI), allocating a large percentage of their portfolios to this stock.

Judging by the fact that CVR Energy, Inc. (NYSE:CVI) has faced declining sentiment from the entirety of the hedge funds we track, logic holds that there is a sect of funds that slashed their entire stakes last quarter. Interestingly, Ray Dalio’s Bridgewater Associates cut the biggest investment of the “upper crust” of funds tracked by Insider Monkey, totaling close to $2.1 million in stock, and Peter Rathjens, Bruce Clarke and John Campbell’s Arrowstreet Capital was right behind this move, as the fund cut about $1.4 million worth. These moves are interesting, as total hedge fund interest was cut by 3 funds last quarter.

As you can see these stocks had an average of 24.25 hedge funds with bullish positions and the average amount invested in these stocks was $438 million. That figure was $3712 million in CVI’s case. Axis Capital Holdings Limited (NYSE:AXS) is the most popular stock in this table. On the other hand The Hanover Insurance Group, Inc. (NYSE:THG) is the least popular one with only 20 bullish hedge fund positions. Compared to these stocks CVR Energy, Inc. (NYSE:CVI) is even less popular than THG. Hedge funds dodged a bullet by taking a bearish stance towards CVI. Our calculations showed that the top 20 most popular hedge fund stocks returned 24.4% in 2019 through September 30th and outperformed the S&P 500 ETF (SPY) by 4 percentage points. Unfortunately CVI wasn’t nearly as popular as these 20 stocks (hedge fund sentiment was very bearish); CVI investors were disappointed as the stock returned -10.6% during the third quarter and underperformed the market. If you are interested in investing in large cap stocks with huge upside potential, you should check out the top 20 most popular stocks (view the video below) among hedge funds as many of these stocks already outperformed the market so far in 2019.