CVR Energy, Inc. (NYSE:CVI) shareholders have witnessed a decrease in hedge fund interest recently. CVI was in 13 hedge funds’ portfolios at the end of the third quarter of 2016. There were 16 hedge funds in our database with CVI positions at the end of the previous quarter. At the end of this article we will also compare CVI to other stocks including Western Refining Logistics LP(NYSE:WNRL), iRobot Corporation (NASDAQ:IRBT), and COMSCORE, Inc. (NASDAQ:SCOR) to get a better sense of its popularity.

At the end of the third quarter, a total of 13 of the hedge funds tracked by Insider Monkey were bullish on this stock, down by 19% from the previous quarter. By comparison, 19 hedge funds held shares or bullish call options in CVI heading into this year. With hedge funds’ sentiment swirling, there exists a few key hedge fund managers who were increasing their holdings considerably (or already accumulated large positions). 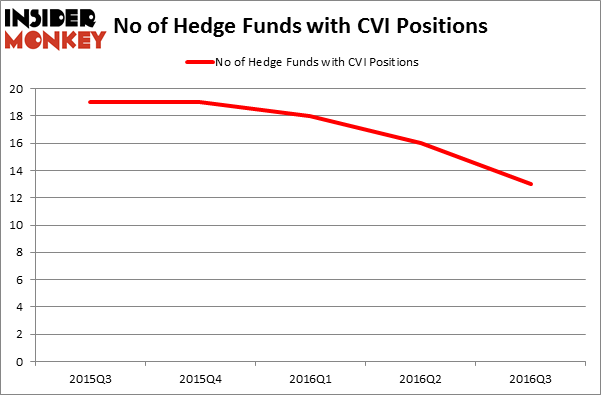 Of the funds tracked by Insider Monkey, Carl Icahn’s Icahn Capital LP holds the largest position in CVR Energy, Inc. (NYSE:CVI). Icahn Capital LP has a $980.4 million position in the stock, comprising 5% of its 13F portfolio. On Icahn Capital LP’s heels is one of the biggest hedge funds in the world, Millennium Management, with a $16.2 million position. Remaining peers with similar optimism include John Overdeck and David Siegel’s Two Sigma Advisors, Ken Griffin’s Citadel Investment Group and Dmitry Balyasny’s Balyasny Asset Management. We should note that none of these hedge funds are among our list of the 100 best performing hedge funds which is based on the performance of their 13F long positions in non-microcap stocks.