How do we determine whether CVR Energy, Inc. (NYSE:CVI) makes for a good investment at the moment? We analyze the sentiment of a select group of the very best investors in the world, who spend immense amounts of time and resources studying companies. They may not always be right (no one is), but data shows that their consensus long positions have historically outperformed the market when we adjust for known risk factors.

CVR Energy, Inc. (NYSE:CVI) was in 22 hedge funds’ portfolios at the end of December. CVI investors should pay attention to an increase in hedge fund sentiment lately. There were 21 hedge funds in our database with CVI positions at the end of the previous quarter. Our calculations also showed that cvi isn’t among the 30 most popular stocks among hedge funds.

What does the smart money think about CVR Energy, Inc. (NYSE:CVI)?

At Q4’s end, a total of 22 of the hedge funds tracked by Insider Monkey were long this stock, a change of 5% from the previous quarter. Below, you can check out the change in hedge fund sentiment towards CVI over the last 14 quarters. With hedgies’ sentiment swirling, there exists a few noteworthy hedge fund managers who were adding to their stakes considerably (or already accumulated large positions). 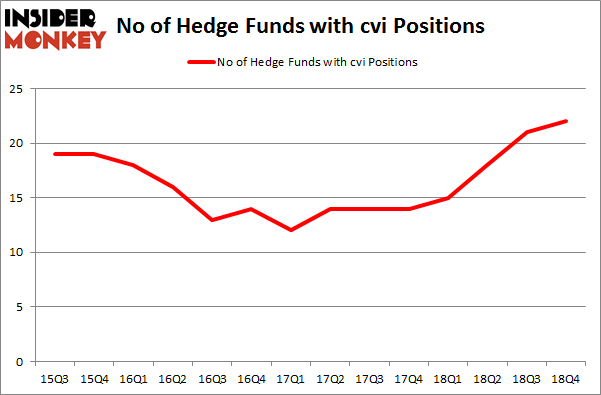 More specifically, Icahn Capital LP was the largest shareholder of CVR Energy, Inc. (NYSE:CVI), with a stake worth $2454.9 million reported as of the end of September. Trailing Icahn Capital LP was Millennium Management, which amassed a stake valued at $31.5 million. Renaissance Technologies, Citadel Investment Group, and HBK Investments were also very fond of the stock, giving the stock large weights in their portfolios.

As industrywide interest jumped, key hedge funds have been driving this bullishness. Blue Mountain Capital, managed by Andrew Feldstein and Stephen Siderow, assembled the most valuable position in CVR Energy, Inc. (NYSE:CVI). Blue Mountain Capital had $5.5 million invested in the company at the end of the quarter. Minhua Zhang’s Weld Capital Management also made a $0.9 million investment in the stock during the quarter. The following funds were also among the new CVI investors: Peter Algert and Kevin Coldiron’s Algert Coldiron Investors and Matthew Tewksbury’s Stevens Capital Management.

As you can see these stocks had an average of 17 hedge funds with bullish positions and the average amount invested in these stocks was $321 million. That figure was $2577 million in CVI’s case. Emcor Group Inc (NYSE:EME) is the most popular stock in this table. On the other hand Mattel, Inc. (NASDAQ:MAT) is the least popular one with only 15 bullish hedge fund positions. Compared to these stocks CVR Energy, Inc. (NYSE:CVI) is more popular among hedge funds. Our calculations showed that top 15 most popular stocks) among hedge funds returned 24.2% through April 22nd and outperformed the S&P 500 ETF (SPY) by more than 7 percentage points. Hedge funds were also right about betting on CVI as the stock returned 27.5% and outperformed the market by an even larger margin. Hedge funds were clearly right about piling into this stock relative to other stocks with similar market capitalizations.