Before we spend countless hours researching a company, we like to analyze what insiders, hedge funds and billionaire investors think of the stock first. This is a necessary first step in our investment process because our research has shown that the elite investors’ consensus returns have been exceptional. In the following paragraphs, we find out what the billionaire investors and hedge funds think of Macquarie Infrastructure Corporation (NYSE:MIC).

Is Macquarie Infrastructure Corporation (NYSE:MIC) an outstanding investment right now? The smart money is getting more optimistic. The number of long hedge fund positions advanced by 4 in recent months. Our calculations also showed that MIC isn’t among the 30 most popular stocks among hedge funds (view the video below). MIC was in 28 hedge funds’ portfolios at the end of June. There were 24 hedge funds in our database with MIC positions at the end of the previous quarter.

In the 21st century investor’s toolkit there are dozens of indicators shareholders can use to analyze publicly traded companies. A couple of the less utilized indicators are hedge fund and insider trading signals. We have shown that, historically, those who follow the top picks of the top hedge fund managers can trounce the S&P 500 by a healthy margin (see the details here).

What have hedge funds been doing with Macquarie Infrastructure Corporation (NYSE:MIC)?

At the end of the second quarter, a total of 28 of the hedge funds tracked by Insider Monkey held long positions in this stock, a change of 17% from one quarter earlier. Below, you can check out the change in hedge fund sentiment towards MIC over the last 16 quarters. So, let’s see which hedge funds were among the top holders of the stock and which hedge funds were making big moves. 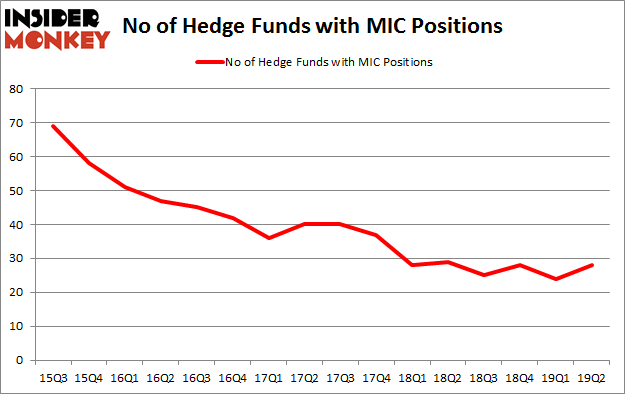 More specifically, Renaissance Technologies was the largest shareholder of Macquarie Infrastructure Corporation (NYSE:MIC), with a stake worth $61.3 million reported as of the end of March. Trailing Renaissance Technologies was GAMCO Investors, which amassed a stake valued at $39 million. Cove Street Capital, Citadel Investment Group, and Miller Value Partners were also very fond of the stock, giving the stock large weights in their portfolios.

As one would reasonably expect, key hedge funds have been driving this bullishness. Miller Value Partners, managed by Bill Miller, created the biggest position in Macquarie Infrastructure Corporation (NYSE:MIC). Miller Value Partners had $10.5 million invested in the company at the end of the quarter. Brian Ashford-Russell and Tim Woolley’s Polar Capital also made a $6.2 million investment in the stock during the quarter. The other funds with brand new MIC positions are Louis Bacon’s Moore Global Investments, Dmitry Balyasny’s Balyasny Asset Management, and Richard Driehaus’s Driehaus Capital.

Let’s now take a look at hedge fund activity in other stocks – not necessarily in the same industry as Macquarie Infrastructure Corporation (NYSE:MIC) but similarly valued. We will take a look at The Chemours Company (NYSE:CC), Cornerstone OnDemand, Inc. (NASDAQ:CSOD), Olin Corporation (NYSE:OLN), and Wright Medical Group N.V. (NASDAQ:WMGI). This group of stocks’ market caps are similar to MIC’s market cap.

As you can see these stocks had an average of 28 hedge funds with bullish positions and the average amount invested in these stocks was $586 million. That figure was $203 million in MIC’s case. Wright Medical Group N.V. (NASDAQ:WMGI) is the most popular stock in this table. On the other hand Olin Corporation (NYSE:OLN) is the least popular one with only 23 bullish hedge fund positions. Macquarie Infrastructure Corporation (NYSE:MIC) is not the least popular stock in this group but hedge fund interest is still below average. This is a slightly negative signal and we’d rather spend our time researching stocks that hedge funds are piling on. Our calculations showed that top 20 most popular stocks among hedge funds returned 24.4% in 2019 through September 30th and outperformed the S&P 500 ETF (SPY) by 4 percentage points. Unfortunately MIC wasn’t nearly as popular as these 20 stocks (hedge fund sentiment was quite bearish); MIC investors were disappointed as the stock returned -0.1% during the third quarter and underperformed the market. If you are interested in investing in large cap stocks with huge upside potential, you should check out the top 20 most popular stocks among hedge funds as many of these stocks already outperformed the market so far in 2019.