Is Macquarie Infrastructure Corporation (MIC) A Good Stock To Buy?

Macquarie Infrastructure Corporation (NYSE:MIC) was in 25 hedge funds’ portfolios at the end of September. MIC investors should be aware of a decrease in activity from the world’s largest hedge funds lately. There were 29 hedge funds in our database with MIC positions at the end of the previous quarter. Our calculations also showed that MIC isn’t among the 30 most popular stocks among hedge funds.

In the eyes of most investors, hedge funds are assumed to be underperforming, outdated investment vehicles of yesteryear. While there are over 8,000 funds with their doors open today, Our researchers choose to focus on the bigwigs of this club, about 700 funds. It is estimated that this group of investors have their hands on the lion’s share of the hedge fund industry’s total capital, and by paying attention to their first-class equity investments, Insider Monkey has unearthed several investment strategies that have historically beaten the S&P 500 index. Insider Monkey’s flagship hedge fund strategy beat the S&P 500 index by 6 percentage points a year since its inception in May 2014 through early November 2018. We were able to generate large returns even by identifying short candidates. Our portfolio of short stocks lost 24% since February 2017 (through December 3rd) even though the market was up nearly 23% during the same period. We just shared a list of 11 short targets in our latest quarterly update.

What have hedge funds been doing with Macquarie Infrastructure Corporation (NYSE:MIC)? 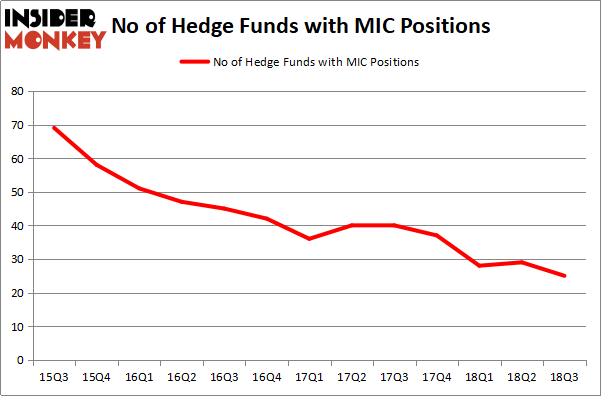 When looking at the institutional investors followed by Insider Monkey, Clint Carlson’s Carlson Capital has the biggest position in Macquarie Infrastructure Corporation (NYSE:MIC), worth close to $73.6 million, comprising 0.9% of its total 13F portfolio. Sitting at the No. 2 spot is GAMCO Investors, managed by Mario Gabelli, which holds a $45.6 million position; 0.3% of its 13F portfolio is allocated to the company. Some other members of the smart money that hold long positions contain Israel Englander’s Millennium Management, Eduardo Abush’s Waterfront Capital Partners and Bernard Selz’s Selz Capital.

Because Macquarie Infrastructure Corporation (NYSE:MIC) has witnessed a decline in interest from the aggregate hedge fund industry, it’s safe to say that there was a specific group of money managers who sold off their full holdings heading into Q3. At the top of the heap, David Costen Haley’s HBK Investments cut the largest position of the “upper crust” of funds monitored by Insider Monkey, comprising close to $36.5 million in stock, and Gary Claar’s Claar Advisors was right behind this move, as the fund dropped about $14.1 million worth. These bearish behaviors are important to note, as aggregate hedge fund interest fell by 4 funds heading into Q3.

As you can see these stocks had an average of 21.25 hedge funds with bullish positions and the average amount invested in these stocks was $451 million. That figure was $318 million in MIC’s case. Mellanox Technologies, Ltd. (NASDAQ:MLNX) is the most popular stock in this table. On the other hand Ritchie Bros. Auctioneers Incorporated (NYSE:RBA) is the least popular one with only 15 bullish hedge fund positions. Macquarie Infrastructure Corporation (NYSE:MIC) is not the most popular stock in this group but hedge fund interest is still above average. This is a slightly positive signal but we’d rather spend our time researching stocks that hedge funds are piling on. In this regard MLNX might be a better candidate to consider a long position.