Is Macquarie Infrastructure Corporation (MIC) A Good Stock To Buy?

Macquarie Infrastructure Corporation (NYSE:MIC) was in 28 hedge funds’ portfolios at the end of the fourth quarter of 2018. MIC shareholders have witnessed an increase in hedge fund sentiment lately. There were 25 hedge funds in our database with MIC holdings at the end of the previous quarter. Our calculations also showed that mic isn’t among the 30 most popular stocks among hedge funds.

At Q4’s end, a total of 28 of the hedge funds tracked by Insider Monkey were long this stock, a change of 12% from the previous quarter. Below, you can check out the change in hedge fund sentiment towards MIC over the last 14 quarters. With hedgies’ capital changing hands, there exists a select group of noteworthy hedge fund managers who were adding to their holdings meaningfully (or already accumulated large positions). 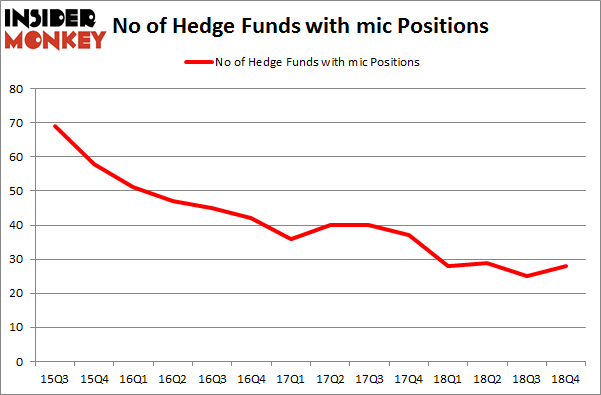 Among these funds, Carlson Capital held the most valuable stake in Macquarie Infrastructure Corporation (NYSE:MIC), which was worth $49.4 million at the end of the third quarter. On the second spot was GAMCO Investors which amassed $35.7 million worth of shares. Moreover, Millennium Management, Renaissance Technologies, and Selz Capital were also bullish on Macquarie Infrastructure Corporation (NYSE:MIC), allocating a large percentage of their portfolios to this stock.

As you can see these stocks had an average of 12.5 hedge funds with bullish positions and the average amount invested in these stocks was $142 million. That figure was $243 million in MIC’s case. NovoCure Limited (NASDAQ:NVCR) is the most popular stock in this table. On the other hand Manchester United PLC (NYSE:MANU) is the least popular one with only 9 bullish hedge fund positions. Compared to these stocks Macquarie Infrastructure Corporation (NYSE:MIC) is more popular among hedge funds. Our calculations showed that top 15 most popular stocks) among hedge funds returned 24.2% through April 22nd and outperformed the S&P 500 ETF (SPY) by more than 7 percentage points. Unfortunately MIC wasn’t nearly as popular as these 15 stock and hedge funds that were betting on MIC were disappointed as the stock returned 14.1% and underperformed the market. If you are interested in investing in large cap stocks with huge upside potential, you should check out the top 15 most popular stocks) among hedge funds as 13 of these stocks already outperformed the market this year.