Is Arconic Inc. (ARNC) Going to Burn These Hedge Funds?

We at Insider Monkey have gone over 730 13F filings that hedge funds and prominent investors are required to file by the SEC The 13F filings show the funds’ and investors’ portfolio positions as of June 28th. In this article, we look at what those funds think of Arconic Inc. (NYSE:ARNC) based on that data.

Arconic Inc. (NYSE:ARNC) has seen an increase in hedge fund sentiment of late. ARNC was in 42 hedge funds’ portfolios at the end of June. There were 34 hedge funds in our database with ARNC positions at the end of the previous quarter. Our calculations also showed that ARNC isn’t among the 30 most popular stocks among hedge funds.

Unlike some fund managers who are betting on Dow reaching 40000 in a year, our long-short investment strategy doesn’t rely on bull markets to deliver double digit returns. We only rely on hedge fund buy/sell signals. Let’s take a look at the recent hedge fund action encompassing Arconic Inc. (NYSE:ARNC).

What does smart money think about Arconic Inc. (NYSE:ARNC)? 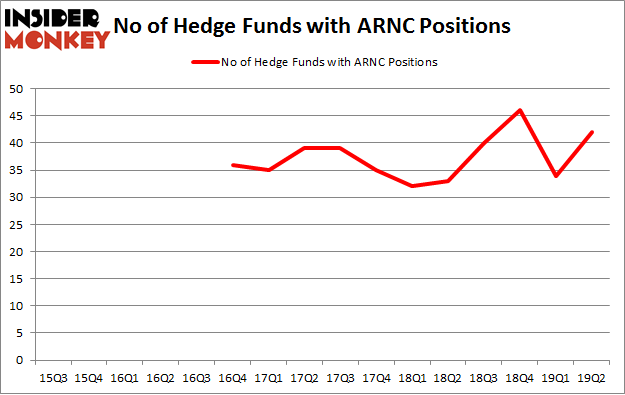 When looking at the institutional investors followed by Insider Monkey, Paul Singer’s Elliott Management has the number one position in Arconic Inc. (NYSE:ARNC), worth close to $1.3401 billion, corresponding to 9% of its total 13F portfolio. The second largest stake is held by First Pacific Advisors LLC, managed by Robert Rodriguez and Steven Romick, which holds a $679.2 million position; 5.9% of its 13F portfolio is allocated to the company. Remaining members of the smart money that hold long positions contain William B. Gray’s Orbis Investment Management, Michael Lowenstein’s Kensico Capital and D. E. Shaw’s D E Shaw.

As one would reasonably expect, key hedge funds were breaking ground themselves. Millennium Management, managed by Israel Englander, created the most outsized position in Arconic Inc. (NYSE:ARNC). Millennium Management had $20.3 million invested in the company at the end of the quarter. Peter Rathjens, Bruce Clarke and John Campbell’s Arrowstreet Capital also made a $16.7 million investment in the stock during the quarter. The other funds with brand new ARNC positions are Zach Schreiber’s Point State Capital, Bruce Kovner’s Caxton Associates LP, and Alexander Mitchell’s Scopus Asset Management.

As you can see these stocks had an average of 31.25 hedge funds with bullish positions and the average amount invested in these stocks was $1138 million. That figure was $3396 million in ARNC’s case. Advance Auto Parts, Inc. (NYSE:AAP) is the most popular stock in this table. On the other hand Zebra Technologies Corporation (NASDAQ:ZBRA) is the least popular one with only 20 bullish hedge fund positions. Compared to these stocks Arconic Inc. (NYSE:ARNC) is more popular among hedge funds. Our calculations showed that top 20 most popular stocks among hedge funds returned 24.4% in 2019 through September 30th and outperformed the S&P 500 ETF (SPY) by 4 percentage points. Unfortunately ARNC wasn’t nearly as popular as these 20 stocks and hedge funds that were betting on ARNC were disappointed as the stock returned 0.8% during the third quarter and underperformed the market. If you are interested in investing in large cap stocks with huge upside potential, you should check out the top 20 most popular stocks (view the video below) among hedge funds as many of these stocks already outperformed the market in Q3.