Is Arconic Inc. (ARNC) A Good Stock To Buy?

Is Arconic Inc. (NYSE:ARNC) a good equity to bet on right now? We like to check what the smart money thinks first before doing extensive research. Although there have been several high profile failed hedge fund picks, the consensus picks among hedge fund investors have historically outperformed the market after adjusting for known risk attributes. It’s not surprising given that hedge funds have access to better information and more resources to find the latest market-moving information.

Arconic Inc. (NYSE:ARNC) investors should be aware of an increase in activity from the world’s largest hedge funds recently. Our calculations also showed that ARNC isn’t among the 30 most popular stocks among hedge funds.

We’re going to take a look at the key hedge fund action regarding Arconic Inc. (NYSE:ARNC).

How have hedgies been trading Arconic Inc. (NYSE:ARNC)?

At Q3’s end, a total of 40 of the hedge funds tracked by Insider Monkey were bullish on this stock, a change of 21% from the previous quarter. On the other hand, there were a total of 35 hedge funds with a bullish position in ARNC at the beginning of this year. With the smart money’s positions undergoing their usual ebb and flow, there exists a select group of noteworthy hedge fund managers who were adding to their stakes significantly (or already accumulated large positions). 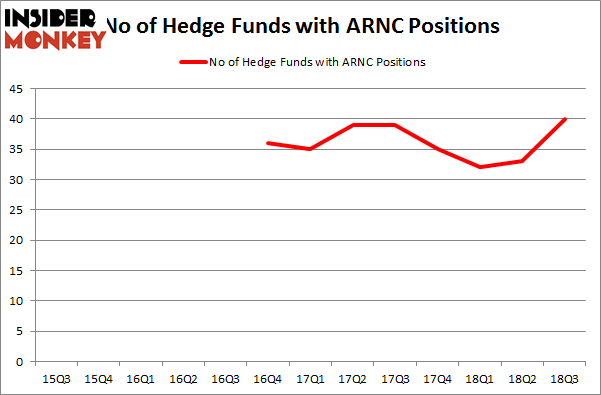 Of the funds tracked by Insider Monkey, Elliott Management, managed by Paul Singer, holds the most valuable position in Arconic Inc. (NYSE:ARNC). Elliott Management has a $1.1424 billion position in the stock, comprising 5% of its 13F portfolio. The second largest stake is held by Orbis Investment Management, led by William B. Gray, holding a $752.2 million position; the fund has 4.3% of its 13F portfolio invested in the stock. Other members of the smart money that are bullish encompass Robert Rodriguez and Steven Romick’s First Pacific Advisors LLC, Joshua Friedman and Mitchell Julis’s Canyon Capital Advisors and Michael Lowenstein’s Kensico Capital.

As one would reasonably expect, key money managers were leading the bulls’ herd. Castle Hook Partners, managed by Josh Donfeld and David Rogers, created the largest position in Arconic Inc. (NYSE:ARNC). Castle Hook Partners had $31.2 million invested in the company at the end of the quarter. Michael A. Price and Amos Meron’s Empyrean Capital Partners also made a $30.3 million investment in the stock during the quarter. The following funds were also among the new ARNC investors: Michael Hintze’s CQS Cayman LP, Frank Brosens’s Taconic Capital, and Isaac Corre’s Governors Lane.

Let’s go over hedge fund activity in other stocks – not necessarily in the same industry as Arconic Inc. (NYSE:ARNC) but similarly valued. We will take a look at Steel Dynamics, Inc. (NASDAQ:STLD), Aramark (NYSE:ARMK), Nektar Therapeutics (NASDAQ:NKTR), and Atmos Energy Corporation (NYSE:ATO). This group of stocks’ market valuations are closest to ARNC’s market valuation.

As you can see these stocks had an average of 26.25 hedge funds with bullish positions and the average amount invested in these stocks was $677 million. That figure was $3.30 billion in ARNC’s case. Aramark (NYSE:ARMK) is the most popular stock in this table. On the other hand Atmos Energy Corporation (NYSE:ATO) is the least popular one with only 15 bullish hedge fund positions. Compared to these stocks Arconic Inc. (NYSE:ARNC) is more popular among hedge funds. Considering that hedge funds are fond of this stock in relation to its market cap peers, it may be a good idea to analyze it in detail and potentially include it in your portfolio.