The market has been volatile as the Federal Reserve continues its rate hikes to normalize the interest rates. Small cap stocks have been hit hard as a result, as the Russell 2000 ETF (IWM) has underperformed the larger S&P 500 ETF (SPY) by about 4 percentage points through November 16th. SEC filings and hedge fund investor letters indicate that the smart money seems to be paring back their overall long exposure since summer months, and the funds’ movements is one of the reasons why the major indexes have retraced. In this article, we analyze what the smart money thinks of Uniqure NV (NASDAQ:QURE) and find out how it is affected by hedge funds’ moves.

Hedge fund interest in Uniqure NV (NASDAQ:QURE) shares was flat at the end of last quarter. This is usually a negative indicator. At the end of this article we will also compare QURE to other stocks including Bluegreen Vacations Corporation (NYSE:BXG), Brookline Bancorp, Inc. (NASDAQ:BRKL), and Cohen & Steers Quality Income Realty Fund Inc (NYSE:RQI) to get a better sense of its popularity.

What does the smart money think about Uniqure NV (NASDAQ:QURE)?

At Q3’s end, a total of 19 of the hedge funds tracked by Insider Monkey were bullish on this stock, representing no change from the previous quarter. The graph below displays the number of hedge funds with bullish position in QURE over the last 13 quarters. With hedgies’ positions undergoing their usual ebb and flow, there exists a few notable hedge fund managers who were boosting their stakes meaningfully (or already accumulated large positions). 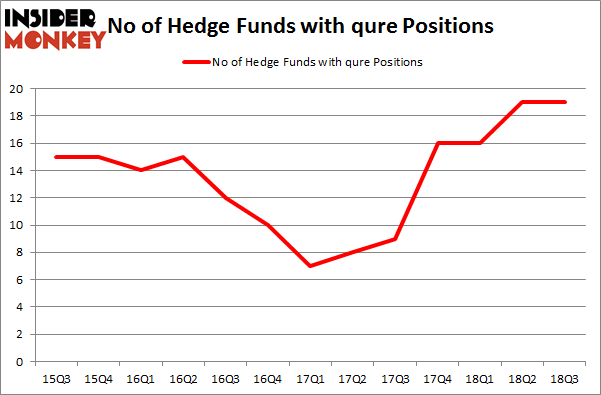 Due to the fact that Uniqure NV (NASDAQ:QURE) has faced a decline in interest from the entirety of the hedge funds we track, it’s easy to see that there was a specific group of fund managers that elected to cut their full holdings last quarter. At the top of the heap, Leon Cooperman’s Omega Advisors said goodbye to the largest position of the 700 funds watched by Insider Monkey, comprising close to $0.9 million in stock, and Peter Muller’s PDT Partners was right behind this move, as the fund cut about $0.7 million worth. These transactions are important to note, as total hedge fund interest stayed the same (this is a bearish signal in our experience).

As you can see these stocks had an average of 3 hedge funds with bullish positions and the average amount invested in these stocks was $15 million. That figure was $321 million in QURE’s case. Brookline Bancorp, Inc. (NASDAQ:BRKL) is the most popular stock in this table. On the other hand Cohen & Steers Quality Income Realty Fund Inc (NYSE:RQI) is the least popular one with only 1 bullish hedge fund positions. Compared to these stocks Uniqure NV (NASDAQ:QURE) is more popular among hedge funds. Considering that hedge funds are fond of this stock in relation to its market cap peers, it may be a good idea to analyze it in detail and potentially include it in your portfolio.

Is Ferro Corporation (FOE) Going to Burn These Hedge Funds?
Monthly Newsletter Strategy
Download a free copy of our newsletter and see the details inside!
Hedge Fund Resource Center
Related News
What Hedge Funds Think About Uniqure NV (QURE)? Here’s Why We Think There’s Opportunity In Uniqure NV (QURE) Why Are Investors Bullish On These Five Stocks On Thursday? Is Smart Money Losing Interest in Uniqure NV (QURE)? Two Healthcare Stocks Are Advancing but See Which One Hedge Funds Sentiment Suggest is Better Adage Capital, Point72 Raise Stakes In These Pharmaceutical Companies 11 Countries With The Worst Modern Music In The World The Top 5 Robo Advisor Apps of 2018 Five Reasons You Need a Day-Trading Mentor
Billionaire Hedge Funds