The fourth quarter was a rough one for most investors, as fears of a rising interest rate environment in the U.S, a trade war with China, and a more or less stagnant Europe, weighed heavily on the minds of investors. Both the S&P 500 and Russell 2000 sank as a result, with the Russell 2000, which is composed of smaller companies, being hit especially hard. This was primarily due to hedge funds, which are big supporters of small-cap stocks, pulling some of their capital out of the volatile markets during this time. Let’s look at how this market volatility affected the sentiment of hedge funds towards ASGN Incorporated (NYSE:ASGN), and what that likely means for the prospects of the company and its stock.

What does the smart money think about ASGN Incorporated (NYSE:ASGN)? 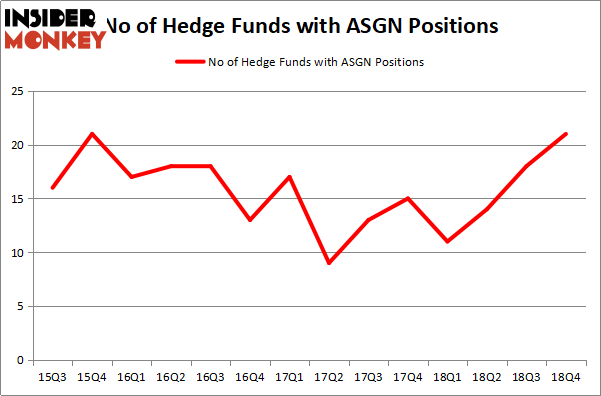 As you can see these stocks had an average of 12.75 hedge funds with bullish positions and the average amount invested in these stocks was $140 million. That figure was $124 million in ASGN’s case. TreeHouse Foods Inc. (NYSE:THS) is the most popular stock in this table. On the other hand CVB Financial Corp. (NASDAQ:CVBF) is the least popular one with only 9 bullish hedge fund positions. Compared to these stocks ASGN Incorporated (NYSE:ASGN) is more popular among hedge funds. Our calculations showed that top 15 most popular stocks) among hedge funds returned 24.2% through April 22nd and outperformed the S&P 500 ETF (SPY) by more than 7 percentage points. Hedge funds were also right about betting on ASGN, though not to the same extent, as the stock returned 24% and outperformed the market as well.

Is J&J Snack Foods Corp. (JJSF) A Good Stock To Buy?
Monthly Newsletter Strategy
Download a free copy of our newsletter and see the details inside!
Hedge Fund Resource Center
Related News
Should You Buy ASGN Incorporated (ASGN)? CEO-CFO Duo at U.S. Building Supplier Sell Shares After Agreeing to be Acquired by Australia’s Boral, Plus Other Insider Trading Activity Amid Slowing Insider Buying Is On Assignment, Inc. (ASGN) A Good Stock To Buy? Xerox Corporation (XRX), On Assignment, Inc. (ASGN) & More: Why You Should Take a Closer Look at These Stocks Should You Avoid On Assignment, Inc. (ASGN)? Insiders Are Dumping Shares of These 3 Companies; Should Investors Be Worried? This Metric Says You Are Smart to Buy Paychex, Inc. (PAYX) 18 Cute Tinder Bio Examples (Female) 20 Clever Bumble Bios for Guys 15 Most Physically Demanding Olympic Sports
Billionaire Hedge Funds