As we already know from media reports and hedge fund investor letters, many hedge funds lost money in fourth quarter, blaming macroeconomic conditions and unpredictable events that hit several sectors, with technology among them. Nevertheless, most investors decided to stick to their bullish theses and their long-term focus allows us to profit from the recent declines. In particular, let’s take a look at what hedge funds think about GrubHub Inc (NYSE:GRUB) in this article.

GrubHub Inc (NYSE:GRUB) was in 23 hedge funds’ portfolios at the end of the fourth quarter of 2018. GRUB investors should be aware of a decrease in enthusiasm from smart money recently. There were 38 hedge funds in our database with GRUB positions at the end of the previous quarter. Our calculations also showed that GRUB isn’t among the 30 most popular stocks among hedge funds.

We’re going to take a peek at the new hedge fund action regarding GrubHub Inc (NYSE:GRUB).

At Q4’s end, a total of 23 of the hedge funds tracked by Insider Monkey were bullish on this stock, a change of -39% from one quarter earlier. The graph below displays the number of hedge funds with bullish position in GRUB over the last 14 quarters. With hedge funds’ sentiment swirling, there exists a select group of noteworthy hedge fund managers who were boosting their stakes substantially (or already accumulated large positions). 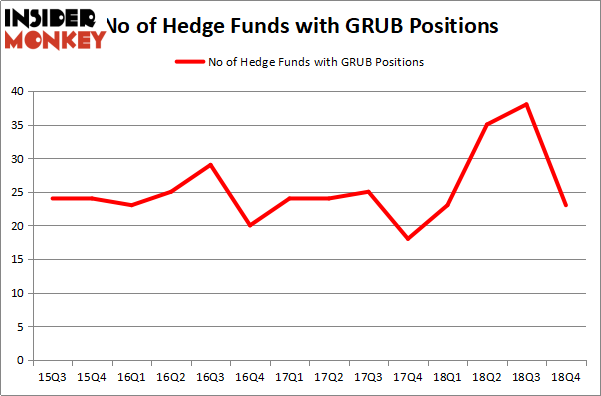 When looking at the institutional investors followed by Insider Monkey, Lansdowne Partners, managed by Alex Snow, holds the number one position in GrubHub Inc (NYSE:GRUB). Lansdowne Partners has a $212.4 million position in the stock, comprising 3.1% of its 13F portfolio. The second largest stake is held by Pelham Capital, managed by Ross Turner, which holds a $174.9 million position; 27.5% of its 13F portfolio is allocated to the company. Remaining hedge funds and institutional investors that hold long positions consist of D. E. Shaw’s D E Shaw, Brian Ashford-Russell and Tim Woolley’s Polar Capital and Christian Leone’s Luxor Capital Group.

Due to the fact that GrubHub Inc (NYSE:GRUB) has witnessed falling interest from the smart money, we can see that there were a few funds who sold off their full holdings last quarter. At the top of the heap, John Overdeck and David Siegel’s Two Sigma Advisors cut the largest position of the “upper crust” of funds watched by Insider Monkey, totaling about $131.9 million in stock, and Israel Englander’s Millennium Management was right behind this move, as the fund sold off about $92.6 million worth. These bearish behaviors are intriguing to say the least, as aggregate hedge fund interest was cut by 15 funds last quarter.

Let’s go over hedge fund activity in other stocks – not necessarily in the same industry as GrubHub Inc (NYSE:GRUB) but similarly valued. These stocks are Graco Inc. (NYSE:GGG), Bio-Rad Laboratories, Inc. (NYSE:BIO), ON Semiconductor Corporation (NASDAQ:ON), and Robert Half International Inc. (NYSE:RHI). All of these stocks’ market caps are similar to GRUB’s market cap.

As you can see these stocks had an average of 27 hedge funds with bullish positions and the average amount invested in these stocks was $465 million. That figure was $860 million in GRUB’s case. Bio-Rad Laboratories, Inc. (NYSE:BIO) is the most popular stock in this table. On the other hand Graco Inc. (NYSE:GGG) is the least popular one with only 18 bullish hedge fund positions. GrubHub Inc (NYSE:GRUB) is not the least popular stock in this group but hedge fund interest is still below average. This is a slightly negative signal and we’d rather spend our time researching stocks that hedge funds are piling on. Our calculations showed that top 15 most popular stocks among hedge funds returned 21.3% through April 8th and outperformed the S&P 500 ETF (SPY) by more than 5 percentage points. Unfortunately GRUB wasn’t in this group. A few hedge funds that bet on GRUB were disappointed as the stock lost 6.7% and underperformed the market. If you are interested in investing in large cap stocks, you should check out the top 15 hedge fund stocks as 12 of these outperformed the market.