GrubHub Inc (NYSE:GRUB): Are Hedge Funds Right About This Stock?

GrubHub Inc (NYSE:GRUB) shareholders have witnessed an increase in activity from the world’s largest hedge funds in recent months. It has not managed, however, to attract that many of the wealthiest hedge fund managers. (To see which stock did take a look at the list of 30 stocks billionaires are crazy about: Insider Monkey billionaires stock index.)

The Chicago-based online and mobile food-ordering company reported third-quarter results on Oct. 25, outstripping investor estimates. GrubHub reported a 52% year over year increase in sales for the period, reaching $247 million, topping the average analyst estimate of $238.5 million. That’s not all, earnings per share of $0.45 also beat investor estimates of $0.41 per share.

At the Sohn Conference, Li Ran, the CEO of Half Sky Capital, pitched the company’s stock outlining several reasons for the bullish outlook. In a presentation delivered at the event, Ran highlighted restaurant sales growth, which is outpacing grocery store spending growth by a wide margin.

We extensively reported on the conference and our take on the GrubHub pitch can be found here.

It is important to note that Grubhub director C. Benjamin Spero purchased 3,000 shares in the company, was back in 2016 for $39.79. The move was a profitable one, with the company’s shares rising exponentially over the last two years. Grubhub stock closed at $76.80, as of Nov. 27.

If you’d ask most market participants, hedge funds are assumed to be unimportant, outdated investment tools of the past. While there are more than 8000 funds in operation at present, We look at the upper echelon of this group, approximately 700 funds. Most estimates calculate that this group of people have their hands on most of the hedge fund industry’s total capital, and by observing their first-class equity investments, Insider Monkey has come up with numerous investment strategies that have historically outrun the market. Insider Monkey’s flagship hedge fund strategy outrun the S&P 500 index by 6 percentage points per year since its inception in May 2014 through early November 2018. We were able to generate large returns even by identifying short candidates. Our portfolio of short stocks lost 26.1% since February 2017 even though the market was up nearly 19% during the same period. We just shared a list of 11 short targets in our latest quarterly update.

How have hedgies been trading GrubHub Inc (NYSE:GRUB)? 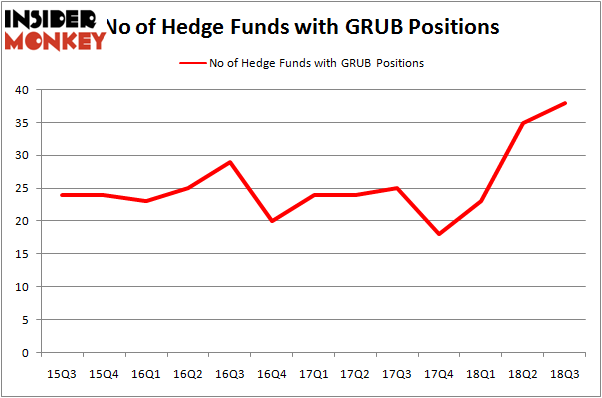 Among these funds, Lansdowne Partners held the most valuable stake in GrubHub Inc (NYSE:GRUB), which was worth $325.2 million at the end of the third quarter. On the second spot was D E Shaw which amassed $278.3 million worth of shares. Moreover, Pelham Capital, Two Sigma Advisors, and Polar Capital were also bullish on GrubHub Inc (NYSE:GRUB), allocating a large percentage of their portfolios to this stock.

Consequently, specific money managers have jumped into GrubHub Inc (NYSE:GRUB) headfirst. Partner Fund Management, managed by Christopher James, initiated the most valuable position in GrubHub Inc (NYSE:GRUB). Partner Fund Management had $15.3 million invested in the company at the end of the quarter. Benjamin A. Smith’s Laurion Capital Management also made a $6.6 million investment in the stock during the quarter. The other funds with new positions in the stock are Benjamin A. Smith’s Laurion Capital Management, Brad Farber’s Atika Capital, and Jim Simons’s Renaissance Technologies.

As you can see these stocks had an average of 30.75 hedge funds with bullish positions and the average amount invested in these stocks was $1262 million. That figure was $1565 million in GRUB’s case. PTC Inc (NASDAQ:PTC) is the most popular stock in this table. On the other hand Cincinnati Financial Corporation (NASDAQ:CINF) is the least popular one with only 11 bullish hedge fund positions. GrubHub Inc (NYSE:GRUB) is not the most popular stock in this group but hedge fund interest is still above average. This is a slightly positive signal but we’d rather spend our time researching stocks that hedge funds are piling on. In this regard PTC might be a better candidate to consider a long position.