Which are the countries that produce the most olives in the world?

Whether you eat them on a pizza or just as an appetizer with cheese and wine, you can’t deny their magnificence. People are either crazy for olives, or they don’t like them at all. There is no middle ground – no “eating them and not enjoying”. Olives are truly an amazing fruit.

Yes, even though they are usually thought of as a very tasty vegetable, olives are actually classified as fruits belonging to the Olea europaea tree. Olive trees can live very long, more than a century. And the oldest one known, according to estimates, Olive Tree of Vouves, is old between 3,500-5,000 years. It lives in Crete, Greece, and still produces olives. Next to this ancient tree, which is an attraction by itself, is a beautiful Olive Tree Museum of Vouves. Olea europaea is native to the Mediterranean, Asia and Africa, and it requires a Mediterranean-like climate, meaning long, hot summers, and mild winters. Those olive trees that survive in other areas that don’t provide this kind of weather, usually don’t produce enough crops. Hence, naturally, all of the countries that produce the most olives in the world must be from the Mediterranean zone. But, surprisingly, not all of them are also among the countries that make the best olive oil in the world. 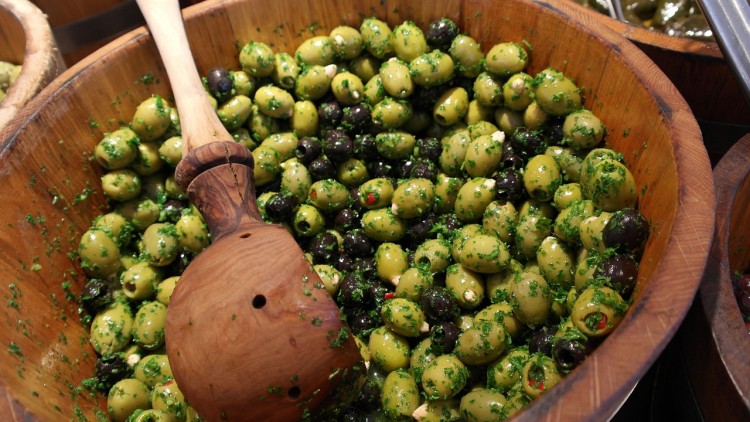 If you didn’t know, consuming both olives and olive oil is great for our health. Some of the benefits that we get from consuming this Mediterranean fruit are: great skin and hair, good cancer prevention, healthy heart and great effect on our cardiovascular system. It is no secret that olives contain a lot of fat, but that fat is a monounsaturated fatty acid that is actually good for our health. Eating this kind of fat will help raise your good cholesterol and lower your bad cholesterol. Don’t worry about gaining weight when consuming olives, as it turns out – they can help you lose weight. How is that possible? Well, according to a research, people more easily feel full when consuming olive oil and olives, because they are raising the levels of satiety hormone serotonin in their blood. So, yes, eating this amazing fatty fruit can help you lose weight with many other health benefits in addition. Olives are rich in copper, vitamin E, iron, and fiber.

Contrary to the popular belief black, purple and green olives are not the olives of a different kind. Their color only indicates their state of ripeness. Simply, the darker the olive, the riper it is.

And do you know why is olive branch considered a symbol of peace? Well, there are many stories, explaining this. One of them is, known to many, comes from the Bible. When the great flood happened, Noah sent the dove in a search of a land. The dove returned with the olive leaf that was indicating a land nearby, also symbolizing God’s mercy because he was ending his war on mankind. Another story says that an olive branch became a symbol of peace because olive trees can’t be cultivated during the war times, due to their slow growth. Hence, they are peace-time trees. Whatever reason it is behind this symbolism, one can’t deny the power olive tree has, as it was also recognized by the ancient Greeks who were using the olive wreath as the prize for the winner of the Ancient Olympic Games.

In order to find out who dominates in the olive production world, we’ve used statistic data from the Food and Agriculture Organization of the United Nations. Even though only the statistics from 2013 are available, chances are nothing much has changed since then, because these are the countries who have always been at the top when it comes to olive production.