We hate to say this but, we told you so. On February 27th we published an article with the title Recession is Imminent: We Need A Travel Ban NOW and predicted a US recession when the S&P 500 Index was trading at the 3150 level. We also told you to short the market and buy long-term Treasury bonds. Our article also called for a total international travel ban. While we were warning you, President Trump minimized the threat and failed to act promptly. As a result of his inaction, we will now experience a deeper recession (see why hell is coming). In these volatile markets we scrutinize hedge fund filings to get a reading on which direction each stock might be going. With the first-quarter round of 13F filings behind us it is time to take a look at the stocks in which some of the best money managers in the world preferred to invest or sell heading into the first quarter. One of these stocks was Western Digital Corporation (NASDAQ:WDC).

Western Digital Corporation (NASDAQ:WDC) shareholders have witnessed an increase in support from the world’s most elite money managers lately. Our calculations also showed that WDC isn’t among the 30 most popular stocks among hedge funds (click for Q4 rankings and see the video at the end of this article for Q3 rankings).

According to most stock holders, hedge funds are seen as worthless, old investment vehicles of years past. While there are more than 8000 funds in operation today, Our researchers look at the elite of this club, approximately 850 funds. These investment experts shepherd most of the smart money’s total asset base, and by paying attention to their matchless investments, Insider Monkey has identified several investment strategies that have historically outrun the broader indices. Insider Monkey’s flagship short hedge fund strategy outrun the S&P 500 short ETFs by around 20 percentage points per annum since its inception in March 2017. Our portfolio of short stocks lost 35.3% since February 2017 (through March 3rd) even though the market was up more than 35% during the same period. We just shared a list of 7 short targets in our latest quarterly update .

What does smart money think about Western Digital Corporation (NASDAQ:WDC)? 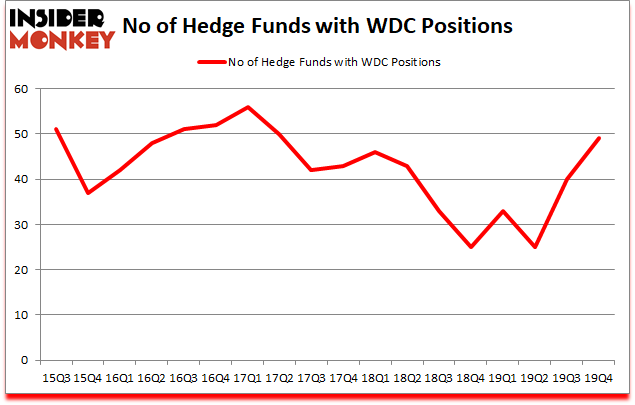 According to Insider Monkey’s hedge fund database, Andrew Wellington and Jeff Keswin’s Lyrical Asset Management has the most valuable position in Western Digital Corporation (NASDAQ:WDC), worth close to $292 million, comprising 4% of its total 13F portfolio. The second most bullish fund manager is Citadel Investment Group, led by Ken Griffin, holding a $123.1 million position; 0.1% of its 13F portfolio is allocated to the company. Some other hedge funds and institutional investors that are bullish comprise Ken Griffin’s Citadel Investment Group, and David Cohen and Harold Levy’s Iridian Asset Management. In terms of the portfolio weights assigned to each position Tegean Capital Management allocated the biggest weight to Western Digital Corporation (NASDAQ:WDC), around 18.95% of its 13F portfolio. AlphaOne Capital Partners is also relatively very bullish on the stock, earmarking 5.49 percent of its 13F equity portfolio to WDC.

Now, key hedge funds have been driving this bullishness. Maverick Capital, managed by Lee Ainslie, established the most outsized position in Western Digital Corporation (NASDAQ:WDC). Maverick Capital had $39.4 million invested in the company at the end of the quarter. John Hurley’s Cavalry Asset Management also made a $26.3 million investment in the stock during the quarter. The following funds were also among the new WDC investors: Peter S. Park’s Park West Asset Management, Ken Heebner’s Capital Growth Management, and George McCabe’s Portolan Capital Management.

As you can see these stocks had an average of 42.75 hedge funds with bullish positions and the average amount invested in these stocks was $2258 million. That figure was $870 million in WDC’s case. Sea Limited (NYSE:SE) is the most popular stock in this table. On the other hand Alexandria Real Estate Equities Inc (NYSE:ARE) is the least popular one with only 21 bullish hedge fund positions. Western Digital Corporation (NASDAQ:WDC) is not the most popular stock in this group but hedge fund interest is still above average. This is a slightly positive signal but we’d rather spend our time researching stocks that hedge funds are piling on. Our calculations showed that top 10 most popular stocks among hedge funds returned 41.4% in 2019 and outperformed the S&P 500 ETF (SPY) by 10.1 percentage points. These stocks gained 1.0% in 2020 through May 1st but beat the market by 12.9 percentage points. Unfortunately WDC wasn’t nearly as popular as these 10 stocks and hedge funds that were betting on WDC were disappointed as the stock returned -34.9% during the same time period and underperformed the market. If you are interested in investing in large cap stocks with huge upside potential, you should check out the top 10 most popular stocks among hedge funds as many of these stocks already outperformed the market so far this year.