Were Hedge Funds Right About Souring On Autodesk, Inc. (ADSK)?

At Insider Monkey, we pore over the filings of nearly 750 top investment firms every quarter, a process we have now completed for the latest reporting period. The data we’ve gathered as a result gives us access to a wealth of collective knowledge based on these firms’ portfolio holdings as of June 28. In this article, we will use that wealth of knowledge to determine whether or not Autodesk, Inc. (NASDAQ:ADSK) makes for a good investment right now.

Is Autodesk, Inc. (NASDAQ:ADSK) a bargain? Investors who are in the know are becoming less hopeful. The number of bullish hedge fund positions were cut by 1 lately. Our calculations also showed that ADSK isn’t among the 30 most popular stocks among hedge funds (see the video at the end of this article). ADSK was in 56 hedge funds’ portfolios at the end of the second quarter of 2019. There were 57 hedge funds in our database with ADSK holdings at the end of the previous quarter.

Unlike some fund managers who are betting on Dow reaching 40000 in a year, our long-short investment strategy doesn’t rely on bull markets to deliver double digit returns. We only rely on hedge fund buy/sell signals. We’re going to check out the recent hedge fund action encompassing Autodesk, Inc. (NASDAQ:ADSK).

What have hedge funds been doing with Autodesk, Inc. (NASDAQ:ADSK)? 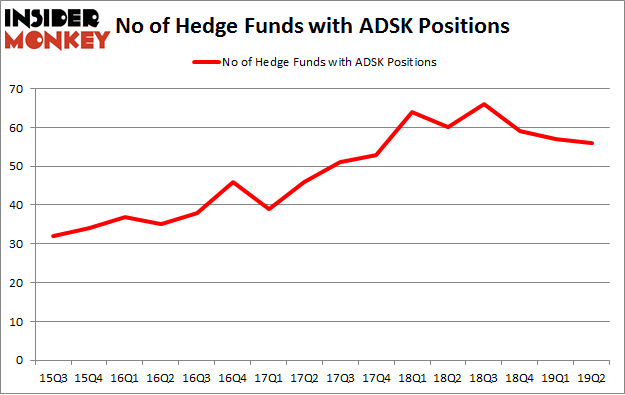 Because Autodesk, Inc. (NASDAQ:ADSK) has experienced declining sentiment from the aggregate hedge fund industry, it’s safe to say that there lies a certain “tier” of hedgies that slashed their full holdings last quarter. It’s worth mentioning that John Smith Clark’s Southpoint Capital Advisors dropped the largest position of the 750 funds watched by Insider Monkey, comprising about $77.9 million in stock, and Dennis Puri and Oliver Keller’s Hunt Lane Capital was right behind this move, as the fund said goodbye to about $31.2 million worth. These bearish behaviors are important to note, as total hedge fund interest dropped by 1 funds last quarter.