Autodesk, Inc. (ADSK): Are Hedge Funds Right About This Stock?

The Insider Monkey team has completed processing the quarterly 13F filings for the September quarter submitted by the hedge funds and other money managers included in our extensive database. Most hedge fund investors endured a torrid quarter, which certainly propelled them to adjust their equity holdings so as to maintain the desired risk profile. As a result, the relevancy of these public filings and their content is indisputable, as they may reveal numerous high-potential stocks. The following article will discuss the smart money sentiment towards Autodesk, Inc. (NASDAQ:ADSK).

Autodesk, Inc. (NASDAQ:ADSK) has seen an increase in hedge fund sentiment recently. ADSK was in 66 hedge funds’ portfolios at the end of the third quarter of 2018. There were 60 hedge funds in our database with ADSK positions at the end of the previous quarter. Our calculations also showed that ADSK isn’t among the 30 most popular stocks among hedge funds.

We’re going to take a gander at the latest hedge fund action regarding Autodesk, Inc. (NASDAQ:ADSK). 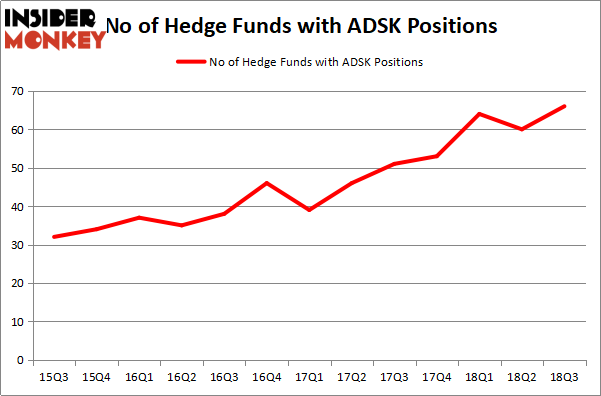 More specifically, Tiger Global Management LLC was the largest shareholder of Autodesk, Inc. (NASDAQ:ADSK), with a stake worth $361.8 million reported as of the end of September. Trailing Tiger Global Management LLC was Darsana Capital Partners, which amassed a stake valued at $339.5 million. Citadel Investment Group, Point State Capital, and Sachem Head Capital were also very fond of the stock, giving the stock large weights in their portfolios.

As industry-wide interest jumped, some big names have been driving this bullishness. Polar Capital, managed by Brian Ashford-Russell and Tim Woolley, established the biggest position in Autodesk, Inc. (NASDAQ:ADSK). Polar Capital had $125.6 million invested in the company at the end of the quarter. Jim Simons’s Renaissance Technologies also made a $106.2 million investment in the stock during the quarter. The following funds were also among the new ADSK investors: Dennis Puri and Oliver Keller’s Hunt Lane Capital, Jeffrey Talpins’s Element Capital Management, and James Crichton’s Hitchwood Capital Management.

As you can see these stocks had an average of 29.25 hedge funds with bullish positions and the average amount invested in these stocks was $1017 million. That figure was $3574 million in ADSK’s case. Williams Companies, Inc. (NYSE:WMB) is the most popular stock in this table. On the other hand 0 is the least popular one with only 17 bullish hedge fund positions. Compared to these stocks Autodesk, Inc. (NASDAQ:ADSK) is more popular among hedge funds. Considering that hedge funds are fond of this stock in relation to its market cap peers, it may be a good idea to analyze it in detail and potentially include it in your portfolio.