Were Hedge Funds Right About Piling Into Autodesk, Inc. (ADSK)?

Autodesk, Inc. (NASDAQ:ADSK) investors should pay attention to a decrease in support from the world’s most elite money managers in recent months. ADSK was in 59 hedge funds’ portfolios at the end of December. There were 66 hedge funds in our database with ADSK holdings at the end of the previous quarter. Our calculations also showed that ADSK isn’t among the 30 most popular stocks among hedge funds.

At the moment there are a large number of metrics market participants employ to assess stocks. Some of the less utilized metrics are hedge fund and insider trading indicators. Our researchers have shown that, historically, those who follow the top picks of the top investment managers can trounce the S&P 500 by a healthy margin (see the details here).

What have hedge funds been doing with Autodesk, Inc. (NASDAQ:ADSK)?

At Q4’s end, a total of 59 of the hedge funds tracked by Insider Monkey held long positions in this stock, a change of -11% from the second quarter of 2018. Below, you can check out the change in hedge fund sentiment towards ADSK over the last 14 quarters. So, let’s see which hedge funds were among the top holders of the stock and which hedge funds were making big moves. 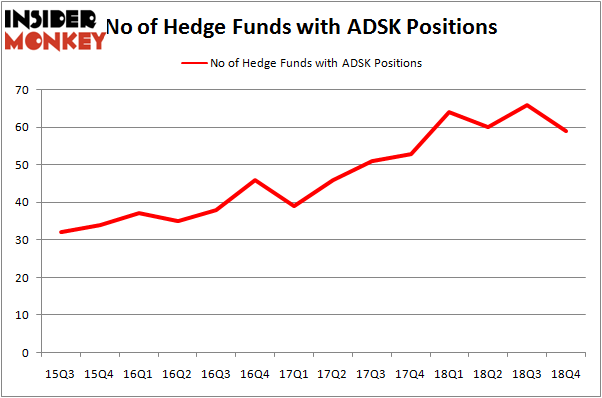 Among these funds, Lone Pine Capital held the most valuable stake in Autodesk, Inc. (NASDAQ:ADSK), which was worth $493.4 million at the end of the third quarter. On the second spot was Darsana Capital Partners which amassed $234.7 million worth of shares. Moreover, Egerton Capital Limited, SRS Investment Management, and Sachem Head Capital were also bullish on Autodesk, Inc. (NASDAQ:ADSK), allocating a large percentage of their portfolios to this stock.

Because Autodesk, Inc. (NASDAQ:ADSK) has faced bearish sentiment from the smart money, logic holds that there lies a certain “tier” of hedgies who were dropping their positions entirely by the end of the third quarter. At the top of the heap, Zach Schreiber’s Point State Capital said goodbye to the biggest stake of the 700 funds followed by Insider Monkey, valued at close to $183.9 million in stock, and Andreas Halvorsen’s Viking Global was right behind this move, as the fund dumped about $177.9 million worth. These bearish behaviors are important to note, as aggregate hedge fund interest was cut by 7 funds by the end of the third quarter.

As you can see these stocks had an average of 20.25 hedge funds with bullish positions and the average amount invested in these stocks was $637 million. That figure was $3087 million in ADSK’s case. O’Reilly Automotive Inc (NASDAQ:ORLY) is the most popular stock in this table. On the other hand Chunghwa Telecom Co., Ltd (NYSE:CHT) is the least popular one with only 2 bullish hedge fund positions. Compared to these stocks Autodesk, Inc. (NASDAQ:ADSK) is more popular among hedge funds. Hedge funds are clearly bullish about the stock even though there was a small decline in sentiment during Q4. Our calculations showed that top 15 most popular stocks among hedge funds returned 19.7% through March 15th and outperformed the S&P 500 ETF (SPY) by 6.6 percentage points. Hedge funds were also right about betting on ADSK, though not to the same extent, as the stock returned 19.2% and outperformed the market as well.