This Finance Stock is a Favorite Among Top Hedge Funds

Insider Monkey has processed numerous 13F filings of hedge funds and famous investors to create an extensive database of hedge fund holdings. The 13F filings show the hedge funds and investors’ positions as of the end of the second quarter. You can find write-ups about an individual hedge fund’s trades on numerous financial news websites. However, in this article we will take a look at their collective moves and analyze what the smart money thinks of Citizens Financial Group Inc (NYSE:CFG) based on that data.

There wasn’t a big change in hedge fund ownership of Citizens Financial Group Inc (NYSE:CFG) during Q2, but several of its biggest bulls continued to buy more shares. Most prominent among them was Ken Griffin’s Citadel Investment (12.15 million shares), which remained the top CFG shareholder among the funds tracked in our database after expanding its position by another 54%. On the other hand, Zach Schreiber’s Point State Capital sold off its $174 million position during Q2. Nonetheless, the value of hedgies’ holdings rose by 8% to $1.78 billion, even as the stock lost some value during Q2. Shares were hit hard again in October, compelling Director Charles John Koch to make an insider purchase of 14,000 shares, which landed it in the top 10 of The 25 Biggest Insider Purchases in October.

What have hedge funds been doing with Citizens Financial Group Inc (NYSE:CFG)? 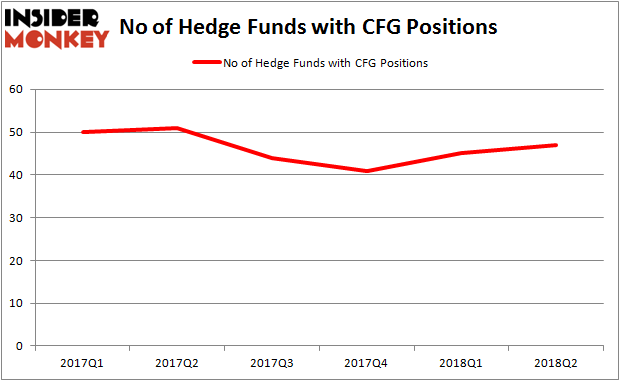 The largest stake in Citizens Financial Group Inc (NYSE:CFG) was held by Citadel Investment Group, which reported holding $472.6 million worth of stock as of the end of June. It was followed by D E Shaw with a $216.9 million position. Other investors bullish on the company included EJF Capital, Elizabeth Park Capital Management, and Claar Advisors.

As you can see these stocks had an average of 28 hedge funds with bullish positions and the average amount invested in these stocks was $1.21 billion. That figure was $1.78 billion in CFG’s case. Mylan Inc. (NASDAQ:MYL) is the most popular stock in this table. On the other hand Energy Transfer Equity, L.P. (NYSE:ETE) is the least popular one with only 16 bullish hedge fund positions. Compared to these stocks Citizens Financial Group Inc (NYSE:CFG) is more popular among hedge funds. Considering that hedge funds are fond of this stock in relation to its market cap peers, and insiders are also buying up shares, it may be a good idea to analyze it in detail and potentially include it in your portfolio.

Is CFG A Good Investment Right Now? Is CFG A Good Stock To Buy? NYSE:CFG The 25 Biggest Insider Purchases in October Yahoo Finance