At the end of February we announced the arrival of the first US recession since 2009 and we predicted that the market will decline by at least 20% in (see why hell is coming). We reversed our stance on March 25th after seeing unprecedented fiscal and monetary stimulus unleashed by the Fed and the Congress. This is the perfect market for stock pickers, now that the stocks are fully valued again. In these volatile markets we scrutinize hedge fund filings to get a reading on which direction each stock might be going. In this article, we will take a closer look at hedge fund sentiment towards Orion Engineered Carbons SA (NYSE:OEC) at the end of the second quarter and determine whether the smart money was really smart about this stock.

At Insider Monkey we scour multiple sources to uncover the next great investment idea. For example, Federal Reserve has been creating trillions of dollars electronically to keep the interest rates near zero. We believe this will lead to inflation and boost precious metals prices. So, we are checking out this junior gold mining stock. We are also checking out this lithium company which could benefit from the electric car adoption. We go through lists like the 10 most profitable companies in the world to pick the best large-cap stocks to buy. Even though we recommend positions in only a tiny fraction of the companies we analyze, we check out as many stocks as we can. We read hedge fund investor letters and listen to stock pitches at hedge fund conferences. You can subscribe to our free daily newsletter on our website to get excerpts of these letters in your inbox. With all of this in mind let’s take a look at the new hedge fund action encompassing Orion Engineered Carbons SA (NYSE:OEC). 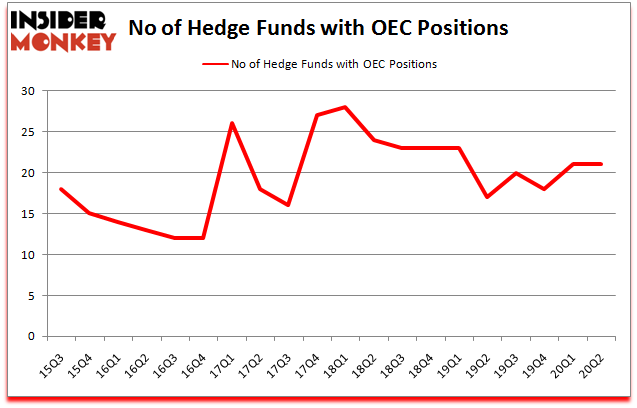 According to publicly available hedge fund and institutional investor holdings data compiled by Insider Monkey, Renaissance Technologies, holds the number one position in Orion Engineered Carbons SA (NYSE:OEC). Renaissance Technologies has a $37.1 million position in the stock, comprising less than 0.1%% of its 13F portfolio. The second largest stake is held by Robert Rodriguez and Steven Romick of First Pacific Advisors LLC, with a $18 million position; the fund has 0.2% of its 13F portfolio invested in the stock. Remaining hedge funds and institutional investors that are bullish include Richard S. Pzena’s Pzena Investment Management, Tony Davis’s Inherent Group and John Overdeck and David Siegel’s Two Sigma Advisors. In terms of the portfolio weights assigned to each position Inherent Group allocated the biggest weight to Orion Engineered Carbons SA (NYSE:OEC), around 13.5% of its 13F portfolio. Harvey Partners is also relatively very bullish on the stock, earmarking 2.11 percent of its 13F equity portfolio to OEC.

Because Orion Engineered Carbons SA (NYSE:OEC) has experienced declining sentiment from the smart money, we can see that there lies a certain “tier” of hedgies that elected to cut their positions entirely in the second quarter. Interestingly, Jonathan Barrett and Paul Segal’s Luminus Management cut the largest investment of the “upper crust” of funds monitored by Insider Monkey, worth close to $7.3 million in stock. Alexander Mitchell’s fund, Scopus Asset Management, also dropped its stock, about $2.2 million worth. These bearish behaviors are important to note, as total hedge fund interest stayed the same (this is a bearish signal in our experience).

As you can see these stocks had an average of 10 hedge funds with bullish positions and the average amount invested in these stocks was $73 million. That figure was $123 million in OEC’s case. Neoleukin Therapeutics, Inc. (NASDAQ:NLTX) is the most popular stock in this table. On the other hand Sinovac Biotech Ltd. (NASDAQ:SVA) is the least popular one with only 3 bullish hedge fund positions. Compared to these stocks Orion Engineered Carbons SA (NYSE:OEC) is more popular among hedge funds. Our overall hedge fund sentiment score for OEC is 77.5. Stocks with higher number of hedge fund positions relative to other stocks as well as relative to their historical range receive a higher sentiment score. Our calculations showed that top 10 most popular stocks among hedge funds returned 41.4% in 2019 and outperformed the S&P 500 ETF (SPY) by 10.1 percentage points. These stocks returned 24.8% in 2020 through the end of September but still managed to beat the market by 19.3 percentage points. Hedge funds were also right about betting on OEC as the stock returned 18.1% since the end of June and outperformed the market by an even larger margin. Hedge funds were clearly right about piling into this stock relative to other stocks with similar market capitalizations.

Is OEC A Good Investment Right Now?Is OEC A Good Stock To Buy?NYSE:OECSentiment Score Between 70 and 80Yahoo Finance

Related Insider Monkey Articles
Best Ivy League Schools Ranked By SelectivityCannae Holdings (CNNE) Has Risen 35% in Last One Year, Outperforms MarketIAA Inc (IAA) Has Risen 31% in Last One Year, Outperforms Market
Calumet Specialty Products (CLMT) Has Fallen 17% in Last One Year, Underperforms...Why The Outcome Of The Election May Not Matter For Fannie MaeLetter from the Value Investing Mental Asylum or How I Embraced Stoics
Monthly Newsletter Strategy
Download a free copy of our newsletter and see the details inside!
Hedge Fund Resource Center
Billionaire Hedge Funds