Is Orion Engineered Carbons SA (NYSE:OEC) ready to rally soon? Prominent investors are turning less bullish. The number of long hedge fund positions fell by 6 recently. Our calculations also showed that OEC isn’t among the 30 most popular stocks among hedge funds (see the video below).

According to most stock holders, hedge funds are seen as unimportant, outdated financial tools of years past. While there are over 8000 funds in operation today, We hone in on the elite of this group, about 750 funds. These investment experts direct bulk of the hedge fund industry’s total asset base, and by tracking their first-class equity investments, Insider Monkey has spotted numerous investment strategies that have historically beaten the S&P 500 index. Insider Monkey’s flagship hedge fund strategy defeated the S&P 500 index by around 5 percentage points per annum since its inception in May 2014. We were able to generate large returns even by identifying short candidates. Our portfolio of short stocks lost 25.7% since February 2017 (through September 30th) even though the market was up more than 33% during the same period. We just shared a list of 10 short targets in our latest quarterly update . 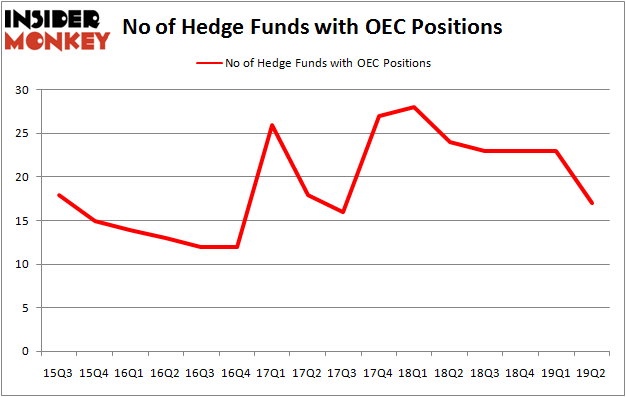 Among these funds, Renaissance Technologies held the most valuable stake in Orion Engineered Carbons SA (NYSE:OEC), which was worth $95 million at the end of the second quarter. On the second spot was Millennium Management which amassed $49.9 million worth of shares. Moreover, First Pacific Advisors LLC, Inherent Group, and GLG Partners were also bullish on Orion Engineered Carbons SA (NYSE:OEC), allocating a large percentage of their portfolios to this stock.

Because Orion Engineered Carbons SA (NYSE:OEC) has witnessed declining sentiment from hedge fund managers, logic holds that there exists a select few hedgies who sold off their positions entirely in the second quarter. Intriguingly, Amy Minella’s Cardinal Capital dumped the biggest position of all the hedgies followed by Insider Monkey, valued at about $13.2 million in stock. Steve Cohen’s fund, Point72 Asset Management, also said goodbye to its stock, about $4.6 million worth. These bearish behaviors are important to note, as total hedge fund interest was cut by 6 funds in the second quarter.